A Vampire's Kiss by Rebecca Zanetti is out!! 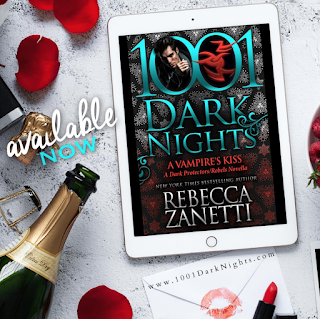 A Vampire’s Kiss, an all-new sinfully-hot paranormal novella set in the Dark

From New York Times and USA Today bestselling author Rebecca Zanetti comes a
new story in her Dark Protectors/Rebels series...
Unlike several of his brothers, Athan Maxwell accepted the curse inherent in his DNA
and solved the problem a century ago by mating his one true mate and saving her life at the same time. Now they only meet up four times a year to exchange blood and keep themselves healthy because that was the deal. Yet after a hundred years, his mate has only become more beguiling and intriguing, and when he discovers a new threat on her tail, his promise of sitting back and leaving her alone goes right out of the window. Ivy O’Dwyer has enjoyed the last century as an immortal being, evolving from being a farmer’s daughter to the successful CEO of an Internet company. Sure, life gets lonely without the chance to date, and yes, she’s grateful to her vampire mate for saving her life so long ago, and yet the dreams she has of the sexy male won’t desert her. So when he storms in to save her life, in all vampire-possessive mode, it’s difficult to stand her ground. Unfortunately, when they finally discover that living forever but alone isn’t worth it, it might be too late.

**Every 1001 Dark Nights novella is a standalone story. For new readers, it’s an

introduction to an author’s world. And for fans, it’s a bonus book in the author’s series.

We hope you'll enjoy each one as much as we do.**

at January 04, 2023
Email ThisBlogThis!Share to TwitterShare to FacebookShare to Pinterest