Wake of War by Zac Topping 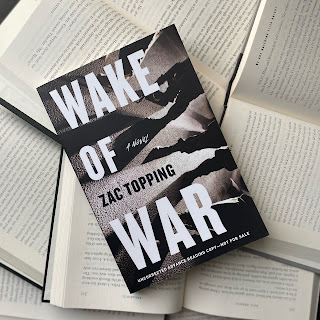 Releases June 19th ~ Get it on Amazon
https://amzn.to/3tbUtei
Wake of War by Zac Topping is action, movement, adventure, and strategy personified. An apocalyptic tale showcasing the length of what people will go through in order to gain dominance over another. It’s all centered around the United States deteriorating into a Civil War. It can be very heavy at times but I feel that fans of this genre will be enthralled.
~Tanja

“I just hope I’m on the right side of history.”

The United States of America is a crumbling republic. With the value of the dollar imploding, the government floundering, and national outrage and resentment growing by the hour, a rebellion has caught fire. The Revolutionary Front, led by Joseph Graham, has taken control of Salt Lake City.

In a nation where opportunity is sequestered behind the gilded doors of the rich and powerful, joining the Army seemed like James Trent’s best option. He just never thought he’d see combat. Now Trent finds himself on the front lines fighting for something he doesn’t even know if he believes in. Destroying innocent lives wasn’t what he signed on for, and he can feel himself slipping away with every casualty.

Sharpshooter Sam Cross was just fourteen when American soldiers gunned down her parents and forced her brother into conscription. Now, five years later, retribution feels like her only option to stitch the wound of her past. She has accepted Joseph Graham’s offer to be his secret weapon. His Reaper in the Valley. But retribution always comes at a cost.

When forces clash in Salt Lake City, alliances will be shattered, resolve will be tested, and when the dust clears nobody will be able to lie to themselves, or be lied to, again.
Thank You to @ForgeBooks for gifting me this title. #Forgebooks #Forge #ZacTopping #militarythriller #sciencefiction #WakeofWar #June19th
at July 14, 2022
Email ThisBlogThis!Share to TwitterShare to FacebookShare to Pinterest