The Boy in the Photo by Nicole Trope 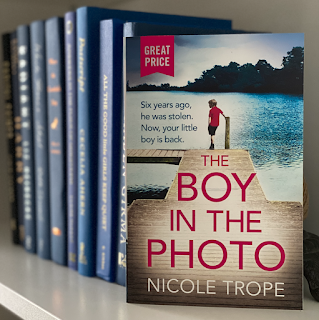 Out Now! Get it on Amazon
https://amzn.to/35ITMgf
Originally Published June 2019, The Boy in the Photo by Nicole Trope is again on the market as a mass-market paperback via Grand Central Publishing. This is an unfolding story that began six years ago with the abduction of Daniel. Now in the present mother, Megan, must try to rekindle the relationship that was ripped away from her by an abusive ex-husband. The Boy in the Photo is an eerie yet thrilling type of read. One that keeps the reader anxious and nervous. I enjoyed it very much.
~Tanja
From the Cover...
She becomes aware of the silence at the other end of the line. A prickling sensation crawls up her arms, her heart rate speeds up. ‘Found who?’ she asks, slowly, carefully, deliberately.‘They found Daniel.’

Megan waits at the school gates for her six-year-old son, Daniel. As children come and go, the playground emptying, panic bubbles inside her. Daniel is nowhere to be found.

According to his teacher, Daniel’s father, Greg, has picked up his son. Except Greg and Megan are no longer together. After years of being controlled by her cruel husband, Megan has finally found the courage to divorce him. Hands trembling, she dials his number, but the line is dead.

Megan is feeding baby daughter, Evie, when she gets the call she has dreamt about for years. Daniel has walked into a police station in a remote town just a few miles away. Her son is alive – and he’s coming home.

But their joyful family reunion does not go to plan. His room may have been frozen in time, with his Cookie Monster poster and stack of Lego under the bed, but Daniel is no longer the sweet little boy Megan remembers.

Cold and distant, Daniel is grieving the death of his father, blaming Megan for his loss and rejecting his family. And as Megan struggles to connect with the son she no longer recognises as her own, she begins to realise that Daniel has a secret. A secret that could destroy their family and put them in terrible danger.
*Thank you Grand Central Publishing & Novel Suspects for gifting me with this read.
at June 30, 2021
Email ThisBlogThis!Share to TwitterShare to FacebookShare to Pinterest