Awakened by a Demoness by Felicity Heaton 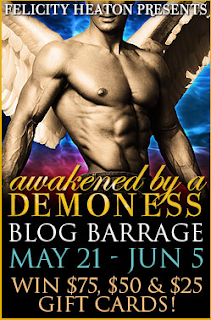 Awakened by a Demoness, the tenth book in New York Times best-seller Felicity Heaton’s hot paranormal romance series, Eternal Mates, is now available in ebook and paperback. To celebrate the release of this awesome milestone in the series, she’s holding a FANTASTIC GIVEAWAY and sharing sneak peeks of the book.
Enter the Awakened by a Demoness international giveaway (ends June 5th) and be in with a shot of winning a $75, $50 or $25 gift certificate by using the Rafflecopter form at the end of this post or at her website, where you can also download a 4 chapter sample of the novel: http://www.felicityheaton.co.uk/awakened-by-a-demoness-paranormal-romance-book.php
Here’s more about this forbidden romance between a powerful angel warrior and one very sassy wicked demoness, including an excerpt for you to sink those teeth into!

Asteria of the Second Legion of demons has messed up. Royally. With a capital everything. Certain that her dark lord is about to end her in the most painful way imaginable, she’s stunned when the fallen angel offers her an uncharacteristic shot at redemption—and determined not to fail him again. With her life on the line, she sets out on a mission that sounds easy but proves to be far from it when a hot slice of angelic eye candy comes storming into her life, stirring dangerous desires and tempting her more than any male before him.
Fifth Commander of the Echelon, the highest order of angels in Heaven and those responsible for hunting demons, he will allow nothing to stand in the way of fulfilling the mission he began close to a century ago so he can finally return to his home. On the verge of securing the half-breed he has been hunting, he can almost taste victory—until a sassy demoness struts into his life, awakening wicked needs and forbidden hungers that will test him to his limit.
When their mission brings them on a collision course, can they fight the fierce heat of the passion that blazes between them to claim a victory for their side or will it burn their resistance to ashes and set their hearts on fire with a love both forbidden and eternal?

Awakened by a Demoness is available from Amazon Kindle, Kobo Books, Barnes and Noble Nook, Apple iBooks stores and other retailers. Also available in paperback. Find the links to your preferred retailer at: http://www.felicityheaton.co.uk/awakened-by-a-demoness-paranormal-romance-book.php

Awakened by a Demoness is available from Amazon Kindle, Kobo Books, Barnes and Noble Nook, Apple iBooks stores and other retailers. Also available in paperback.
Find all the links, a fantastic 4 chapter downloadable sample of the book, and also enter the giveaway and be in with a shot of winning a $75, $50 or $25 gift certificate at her website: http://www.felicityheaton.co.uk/awakened-by-a-demoness-paranormal-romance-book.php
Books in the Eternal Mates paranormal romance series:


ENTER THE AWESOME RAFFLECOPTER GIVEAWAY!
a Rafflecopter giveaway
Follow The Tour
at May 25, 2016
Email ThisBlogThis!Share to TwitterShare to FacebookShare to Pinterest