The Immortal Guardians protect the innocent in secret. Sometimes the secret gets out…

U.S. law enforcement agent Heather Lane can read minds. But not the future. The dream of battle and blood that recurs every night must be a fluke, some obscure terror from her own mind. What its significance might be, she can’t guess: an attack from seven psychotic vampires at once, only separated from nightmare by an eighth very different immortal. A handsome, brave man fighting at her side, a man she misses when she wakes.

Then the dream comes true. Heather is flung into a war between predators and protectors of humanity, the man from her dreams beside her again. Except now that she’s awake, she isn’t sure she can trust Ethan, or the shadow organization he represents. The U.S. military doesn’t trust either of them. But against an onslaught of evil like the one that’s coming, it will take everything they have just to survive… 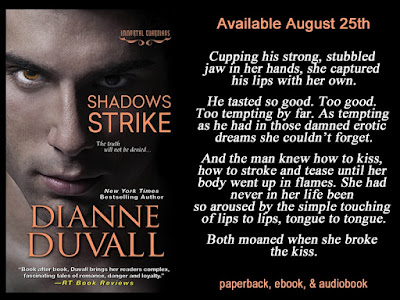 She continued to ease backward as he advanced toward her, matching him step for step. “Look. You’re upset. I understand that. You didn’t want me to get hurt. But I didn’t want you to get hurt either.”

Her continued disregard for her own safety floored him. “I’m immortal!” he roared. “How many times do I have to tell you that to get you to stop trying to put yourself between me and danger? I’m immortal, Heather! A bullet won’t kill me! Am I going to have to shoot myself in the head right in front of you to prove it?”

Her face paled. “Please don’t do that.”

“Yes,” Lisette said in the kitchen. “Please, don’t. If you do, Tracy will bitch and moan for weeks over having to scrub the bloodstains out of the furniture.”

“It’s true,” Tracy confirmed, entering from the hallway. “Bloodstains are hell to get out of fabrics.”

Ethan shot her a glare.

Tracy stopped short. Swallowing hard, she said, “Yeah, I’m just going to . . . join them in the kitchen. Sorry I interrupted.” She hurried into the kitchen.

Heather turned back to face Ethan, who continued to crowd her, too angry to stand still. “Okay. I get it. You’re angry and . . .” She scowled. “Stop stalking me, damn it! I can’t think straight while you’re looking at me as if you want to strangle me.”

He halted. “Now you think I want to hurt you?” he asked incredulously.

Rolling her eyes, she emitted a growl of her own. “No! Oh my gosh, you have a bug up your butt tonight!”

Lisette, Zach, and Tracy all burst into laughter in the kitchen.

Against his will, Ethan felt his own lips twitch as some of the fury drained from him.

“No,” Heather said in more even tones, “I do not think you want to hurt me. You would never do anything to hurt me. I know that.” She sighed. “You’re angry. And I understand why. I just . . . I like you. Okay? I mean I really, really like you, Ethan. I wasn’t lying when I told you I’ve never in my life felt this strong a connection to someone. I’ve never felt this comfortable with someone, even family, as if I could say or do anything . . . like complain about you having a bug up your butt when you look positively murderous.”

He did smile then.

“You make me laugh,” she said. “You’re smart. You’re fun to talk to. You make my heart race and are the best lover I’ve ever had.” Her voice softened. “It would be so easy to fall in love with you.”

His heart began to pound in his chest.

“So I panic inside whenever I think someone is going to hurt you. And I do crazy things, like try to put myself between you and the threat. I don’t think, Eh, he’s immortal. He can take it. I think, I can’t lose him. I just found him. And”—she shrugged—“then I stop thinking altogether and . . . act.”

Now he couldn’t think. He had assumed, on some level, that most of her attraction to him stemmed from her inability to read his mind. But she hadn’t even mentioned that. “You care about me,” he murmured with some amazement.

“Yes. Very much.” A spark of vulnerability entered her soft brown eyes.

“I feel the same for you,” he told her. Resting his hands on her hips, he drew her toward him until their bodies touched. “Which is why it terrifies me and infuriates me whenever you try to sacrifice yourself for me. You can’t do that, Heather.”

“If something happens to me,” he interrupted, “you won’t lose me. I can recover from anything short of having my head removed. Even excessive blood loss won’t kill me, not the way it will a vampire. But you are mortal. If something happens to you, and Seth or Zach or one of the other healers isn’t around or can’t get to you fast enough, I’ll lose you. And for the rest of eternity, I will have to live with the knowledge that you died needlessly, thinking you were protecting me, and will wonder what could have been.”

Biting her lip, she leaned into him. “I’m sorry. This whole immortality thing is still new to me. It hasn’t made it to my subconscious yet. Once it does, I’ll react better in a crisis.”

How he wished he could promise her there would be no more crises.

Ethan sighed. “I just want us to have a chance to see where this can lead, to see what we can have together.”

She offered him a tentative smile. “So do I.” Then she winked. “You’re irresistible. I want to see if that’s going to wear off in time.”

“It will,” Zach promised from the kitchen.

Dianne loves all things creative. When she isn't writing, Dianne is active in the independent film industry and has even appeared on-screen, crawling out of a moonlit grave and wielding a machete like some of the vampires she has created in her books.

For the latest news on upcoming releases, contests, and more, please visit www.DianneDuvall.com. You can also find Dianne online . . .

at August 14, 2015
Email ThisBlogThis!Share to TwitterShare to FacebookShare to Pinterest