The Three Lives of Alix St. Pierre by Natasha Lester 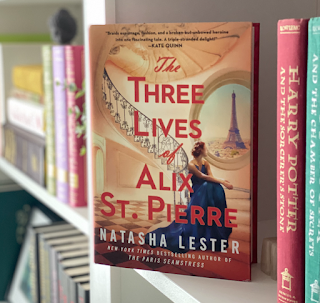 Releasing Jan 10th ~ Get it on Amazon
https://amzn.to/3WMY8f8
Look what just arrived from Forever Publishing. In a gorgeous hardcover no less!
New York Times best-selling author, Natasha Lester is one of my favorites. So when surprise book mail arrives and it's one of her books? I don't think I have enough words of gratitude. Fashion, life, worry, and strife. All of it was amazing.
~Tanja

From the Cover...
Alix St. Pierre. An unforgettable name for an unforgettable woman. She grew up surrounded by Hollywood glamor, but, as an orphan, never truly felt part of that world. In 1943, with WWII raging and men headed overseas to fight, she lands a publicity job to recruit women into the workforce. Her skills—persuasion, daring, quick-witted under pressure—catch the attention of the U.S. government and she finds herself with an even bigger assignment: sent to Switzerland as a spy. Soon Alix is on the precipice of something big, very big. But how far can she trust her German informant…?
After an Allied victory that didn’t come nearly soon enough, Alix moves to Paris, ready to immerse herself in a new position as director of publicity for the yet-to-be-launched House of Dior. In the glamorous halls of the French fashion house, she can nearly forget everything she lost and the dangerous secret she carries. But when a figure from the war reappears and threatens to destroy her future, Alix realizes that only she can right the wrongs of the past …and finally find justice.
*Thank you to @ReadForeverPub @HachetteUS and @GrandCentralPub for sharing this title with me.
#TheThreeLivesofAlixStPierre #NatashaLester #warfiction #historicalfiction
#booksta #Jan17th #neworktimesbestseller #outnow
at January 06, 2023
Email ThisBlogThis!Share to TwitterShare to FacebookShare to Pinterest