Something from Tiffany's by Melissa Hill 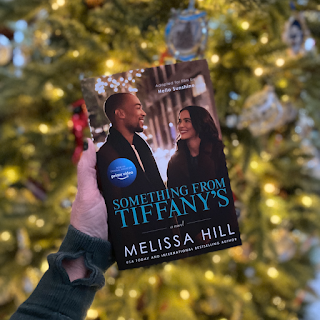 Get the book on Amazon
https://amzn.to/3FxmvXW
It's time people!! Christmas movie time!!
Get a jump by reading the book first!
Film Adaptation by
Hello Sunshine/Amazon Prime Studios on December 9th
Hello Sunshine and Prime Studios released the first look photos from their streaming adaptation of SOMETHING FROM TIFFANY’S, the holiday rom com by Melissa Hill. Sure to be a feel-good holiday hit, the film will premiere on Prime Video December 9th. A newly revised edition of SOMETHING FROM TIFFANY’S is now available from Sourcebooks Landmark and features a new surprise ending to match the film which stars and is executive produced by Zoey Deutch who appears alongside a high-profile cast including Rose Abdoo, Shay Mitchell, Leah Jeffries, Ray Nicholson, and many more.


Nothing compares to the magic and excitement of the holidays in New York City, where the streets blaze with lights, windows dazzle and a special box from Tiffany could change the course of a person’s life. Or several lives. Rachel and Gary, played by Zoey Deutch and Ray Nicholson, are happy enough but not quite ready for that big commitment. Ethan and Vanessa, played by Kendrick Smith Sampson and Shay Mitchell, the perfect picture, are just about to make it official. When a simple mix-up of gifts causes all of their paths to cross, it sets off a series of twists and unexpected discoveries that lead them where they’re truly meant to be. Because love – like life – is full of surprises.
From the Cover...
Soon to be a Hello Sunshine/Prime feature film, from international bestselling author Melissa Hill comes an adorable holiday romance about taking chances, falling in love, and trusting destiny.

New York City at Christmas and a visit to Tiffany's is a recipe to sweep a girl off her feet unless fate has other plans . . .

When Ethan Greene lost his wife, he never thought he would be able to replace her, until one woman stepped in and showed him how to be happy again. Now, on a romantic Christmas trip to New York City, he has a plan to show Vanessa just how important she is to him and maybe even to give his daughter, Daisy, a complete family again. He's going to propose with a perfect ring from Tiffany's.

Gary Knowles and his girlfriend, Rachel, are on the trip of a lifetime in New York at the most magical time of year. The only thing missing is Gary's gift for Rachel, since as usual, he's left his shopping far too late. On a last-minute Christmas Eve visit to Tiffany's, he quickly picks out a charm bracelet for her and heads back to their hotel. But, in a moment, one small mistake changes everything…
#SomethingfromTiffanys #MelissaHill #AmazonPrimeMovie #SourcebookLandmark #Sourcebooks #Booktomovie #AmazonPrimeMovie
at December 09, 2022
Email ThisBlogThis!Share to TwitterShare to FacebookShare to Pinterest