Smoke and Steel by Kristen Ashley 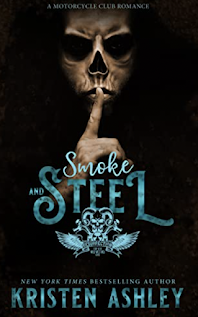 Releases Dec 6th ~ Get it on Amazon
https://amzn.to/3fLLOLZ

Hellen and Core are the most unexpected coupling, but all it took was one whistle at Fortnum’s and not only did he have Hellen, he had me as well. I love a good male character with a backstory of redemption I mean… it’s pretty much everything his MC club is about.
Kristen Ashley has this beautiful way of merging the hard and soft to form this perfect amalgam. I mean, I guess that’s what the title is all about. Smoke and steel. Something soft and billowy up against something robustly hard and unmovable. A juxtaposition of opposites that make perfection. I am a forever fan of Kristen Ashley, and how she creates beautiful characters that are aged and learned as well as continuing to grow. It’s an art and KA does it so incredibly well. I love that her characters are family inside and outside of the current series. There are these wonderful Easter eggs in every book she writes. Giving her diehard fans glimpses of past stories. It’s a fun and clever bonus and yet another reason she maintains a solid fanbase in her genre.
Smoke and Steel is everything I wanted and more.
Five, Rock Chick Forever, Stars!!
~Tanja
From the Cover...
She wasn’t a white dress type of girl…
Hellen Moynihan didn’t have dreams. She had goals. She knew who she was and what she wanted. She also knew what she didn’t. So when her long-term boyfriend didn’t make the grade, she moved on. And when her best friend’s boyfriend showed signs of being a scam artist, Hellen was on the case.

And he wasn’t a white hat type of guy…

Dustin “Hardcore” Cutler didn’t have dreams or goals. A troubled past led Core to do something irredeemable. The only thing he and the men of the Resurrection MC could do was vow to live their lives making up for an unforgiveable act.

This duty leads Core to being a part of a covert protection detail, looking after Hellen Moynihan when trouble is coming to town.

At first, Core finds this dynamo of a woman intriguing, but he’s decided she’s off-limits.

Then Hellen and her friend wade into a multi-state swindling scheme.

Suddenly, off-limits for Core is out the window.

He’s got no choice but to get up close and personal.
at December 06, 2022
Email ThisBlogThis!Share to TwitterShare to FacebookShare to Pinterest