How to Win a Wallflower by Samara Parish 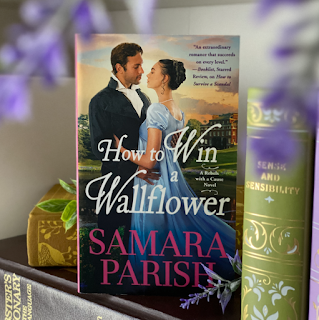 Out Now ~ Get it on Amazon
https://amzn.to/3Wrk5jc
Did you guys see what was released last week? No? Well, let me be the first to show you. How to Win a Wallflower by Samara Parish!! Book three in the Rebels with a Cause Series has blasted into the universe at the perfect time. The "brother's best friend" trope is always a winner for me. Card games and an undeniable attraction had me unable to put this down.
~Tanja
From the Cover...
A wallflower will put everything on the line . . .When John Barnesworth inherits unexpectedly, he abandons his solitude and returns to London to settle his brother's affairs, only to discover his estates are crumbling and he is now betrothed to his brother’s unpleasant fiancée. Her dowry might save him from ruin, but at what cost? His only hope lies with the vivacious, charming Lady Charlotte Stirling, whose audacious solution to John's troubles might actually work. If only he can keep his feelings for her out of the equation . . .

Lady Charlotte Stirling knows she can’t fall for John. He’s her brother’s best friend, he’s engaged to her mortal enemy, and he wants to return to America. Not to mention he’d never survive in her bustling social life. She can, however, try to solve his money problem. But the closer she gets to ensuring his freedom, the harder it is to let him go . . .
@ReadForeverPub @SamaraParish
#HowtoWinaWallflower #SamaraParish #readforeverpub #Hachetteus #readforever
#HistoricalRegencyFiction #SagaFiction #FamilySagaFiction #historicalromance #fyp #outnow #rebelswithacausenovel ##rebelswithacausenovel
at December 19, 2022
Email ThisBlogThis!Share to TwitterShare to FacebookShare to Pinterest