Paris Daillencourt Is About to Crumble by Alexis Hall 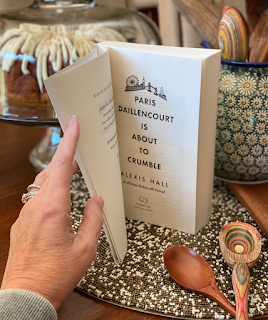 Releases November 1st ~ Get it on Amazon
https://amzn.to/3CP84gI

Alexis Hall can do no wrong when writing about love and baking. It's two of my favorite things! This is the perfect book for lovers of sweet romantic comedy and fans of anything GBBO.

From the Cover...
From the bestselling author of Boyfriend Material comes a sweet and scrumptious romantic comedy about facing your insecurities, finding love, and baking it off, no matter what people say.

Paris Daillencourt is a recipe for disaster. Despite his passion for baking, his cat, and his classics degree, constant self-doubt and second-guessing have left him a curdled, directionless mess. So when his roommate enters him in Bake Expectations, the nation’s favourite baking show, Paris is sure he’ll be the first one sent home.

But not only does he win week one’s challenge—he meets fellow contestant Tariq Hassan. Sure, he’s the competition, but he’s also cute and kind, with more confidence than Paris could ever hope to have. Still, neither his growing romance with Tariq nor his own impressive bakes can keep Paris’s fear of failure from spoiling his happiness. And when the show’s vicious fanbase confirms his worst anxieties, Paris’s confidence is torn apart quicker than tear-and-share bread.

But if Paris can find the strength to face his past, his future, and the chorus of hecklers that live in his brain, he’ll realize it’s the sweet things in life that he really deserves.
at November 01, 2022
Email ThisBlogThis!Share to TwitterShare to FacebookShare to Pinterest