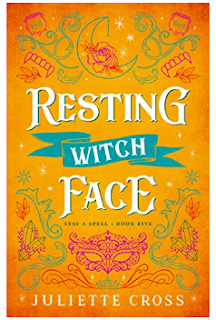 Out October 31st ~ Get it on Amazon
https://amzn.to/3DAJWPi
I thought I had a favorite coupling when it came to the Savoie sisters, but Ruben and Jules have ruined me for everyone else. The most polarizing coupling of the series for me. It’s what we’ve been waiting for. A grown-up second-chance romance where growth and self-discovery are at the core of this reconnection. Filled with so much tension and wanting my kindle was melting.
Resting Witch Face has an incredible plot and storyline that felt almost like it was the first novel in a new series. Many new characters and an epic amount of world-building. I'm hopeful and excited about a possible extension or a spin-off series.
I can’t say enough about the author, Juliette Cross. She is a staple in the genre and a force to be reckoned with. At this point in her writing career, she's right up there with the likes of Ilona Andrews and Nalini Singh. Cross has established a paranormal romance collection that will stand the test of time. I’m so excited for everyone to get their hands on this. I hope you all love it as much as I did.
~Tanja


From the Cover...
Twelve years ago, Jules Savoie ended her relationship with the vampire overlord of New Orleans, Ruben Dubois. For good reasons. A woman in power must often make sacrifices to protect others. She knows the truth of it down to her aching heart.

When Ruben watches his best friend Devraj get married, a stinging realization hits him hard…he’s done waiting. They say time heals all wounds. In this case, it merely sharpened the pain and made one fact crystal clear. Jules Savoie is his soulmate, and nothing would keep him from her. Not anymore.

Forced to work side by side to fight for the werewolf cause, they campaign together at covens from New Orleans to London. The reignited spark burns hotter than ever before. But when a power-hungry vampire sets his predatory sights on Jules, will their love be strong enough against black magic? Or will he lose her again? And this time, maybe…for good.
#RestingWitchFace  #JulietteCross #SavoieSisters #PNR #MagicalRomance
#Happy Halloween #WitchyRomance #Paranormalromance #booksta
at October 31, 2022
Email ThisBlogThis!Share to TwitterShare to FacebookShare to Pinterest