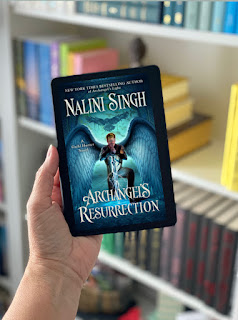 Releases October 25th ~ Get it on Amazon
https://amzn.to/3D4tyGV
This feels monumental. A story transcending time filled with a fury of emotion. Two souls are so intrinsically intertwined one can not exist without the other. This masterpiece takes us through millennia of love, lust, war, peace, and change. I feel as if I got a peek behind the curtain. The grownups let us in for just a moment. Truly an epic read from Nalini Singh. I don't have enough words. Fans of this series are going to be blown away. Truly one of my favorite books of the series, and after fifteen books, that's saying something!
~Tanja
*Thank you to Berkley Publishing for sharing this title with me.
FROM THE COVER...
For thousands of years, the passion between Alexander, Archangel of Persia, and Zanaya, Queen of the Nile, burned furious and bright, seemingly without end. But to be an archangel is to be bound to power violent and demanding. Driven by its primal energy, Alexander and Zanaya fought as fiercely as they loved. Locked in an endless cycle of devotion and heartbreak, it is only Zanaya’s decision to Sleep that ends their love story.

Eons later, it is the Cascade of Death that wakens them both. The passion between them a flame that yet burns, Alexander and Zanaya stand together in one last battle against the ultimate darkness. But even a warrior archangel cannot win every war. Alexander’s scream shatters the world as Zanaya falls, broken and silent…only to rise again in a miracle that may be a devastating curse. For is it truly the Queen of the Nile who has been resurrected?

Only one thing is clear: this is the last beat of their passionate, angry dance. The final song for Alexander and his Zani…
#ArchangelsResurrection #NaliniSingh #GuildHunter
#GuildHunterSeries #AlexanderandZani #QueenoftheNile
#Berkley #BerkleyPublishing #ARC
at October 24, 2022
Email ThisBlogThis!Share to TwitterShare to FacebookShare to Pinterest