The Next 365 Days by Blanka Lipinska 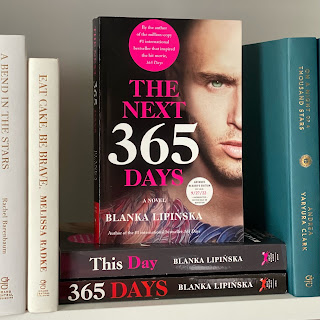 Get it on Amazon
https://amzn.to/3vzxLxD
Not at all what I was expecting...  I'm very interested to hear what people think about this final chapter in the series. Who else read, watched, and has things to say? For me, it's been a fun ride. Not entirely how I thought things would end, but I can see it all the same.Thoughts?
~Tanja

From the Cover...
The global phenomenon and USA TODAY bestselling inspiration behind the Netflix film of the same name—the 365 Days series—continues as it follows the sizzling story of Laura and Massimo.

As the wife of Don Massimo Torricelli, one of the most dangerous Mafia bosses in Sicily, Laura’s life is a roller coaster. She is often at risk, the potential target of Massimo’s unscrupulous enemies who will stop at nothing to destroy the powerful man. And when Laura is seriously injured in an attack, pregnant and fighting to survive, Massimo faces the toughest decision of his life. What will his life be without Laura? Will he be able to raise their child alone? What will the fate of his family be, and whose 365 days may come to a close?
at September 19, 2022
Email ThisBlogThis!Share to TwitterShare to FacebookShare to Pinterest