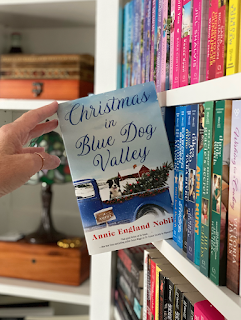 Releases September 20th ~ Get it on Amazon
https://amzn.to/3Rkt7wl
Starting life over during the holiday season in a small town was not on Goldie's to-do list, but when she finally decided to call it quits with her cheating fiancee that's exactly where she finds herself.
Not only does Goldie win the hearts of the residents in Blue Dog Valley she also wins in love. Christmas in Blue Dog Valley by Annie England Noblin is a fantastic way to kick off the holiday reading season. It's a feel-good kind of read that will make you smile.
~Tanja
*Thank you to @Avon and @aenoblin for sharing this title with me!
From the Cover...
Welcome to Blue Dog Valley. Home of the Fighting Elk. Population 3,411.

At first Goldie is nothing more than a fish out of water, with few clients and few friends. But after a less than pleasant encounter with a man whose dog is suffering from a possibly fatal case of bloat, she’s finally earning the trust and goodwill from her fellow Blue Dog Valley citizens. Her clientele grows to include the many farm animals in the town, including a horse named Large Marge, a cape-wearing therapy alpaca, and a yardful of sweater-wearing goats. Add in Kevin, the “worst sheepdog in Blue Dog Valley,” and a Sphinx cat named Airport, and Goldie is having the best time a vet can have. . . aside from the annoying attractive town grump, Cohen, who seems intent on making sure she always feels like an outsider.

With her newfound goodwill, Goldie comes up with an idea to reinvigorate the once flourishing Blue Dog Valley: a Christmas carnival. A petting zoo, pictures with Santa, a baking contest, what more could they want? After only some brief resistance from Cohen and his father, they begin the great plan to reinvigorate Blue Dog Valley.

Will Christmas be enough to salvage this dying town—and be enough to bring Goldie closer to a certain grumpy man?
#ChristmasinBlueDogValley #AnnieEnglandNoblin #HappilyEverAvon  #AvonRomance #ReadAvon #holidayromance #VetRomance
at September 20, 2022
Email ThisBlogThis!Share to TwitterShare to FacebookShare to Pinterest