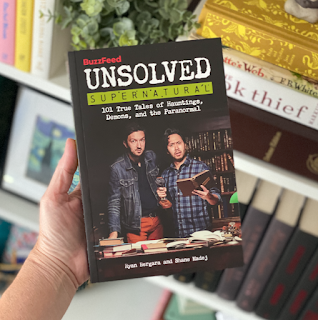 Releases Sept. 6th ~ Get it on Amazon
https://amzn.to/3Rb54Qi
Who's ready for some supernatural shenanigans? Tis' the season and I am ready to get my spooky on! If you haven't heard of their web series this is a perfect way to get to know Ryan Bergara and Shane Madej. It's filled with history and folklore. A frightening good time for sure! I'm adding this to my adult kids' goodie bag. Yes, I still give my twenty-five-year-old Halloween goodies.
~Tanja
*Thank you to @NovelSuspects and @runningpressbooks for sharing this title with me.
From the Cover...
Based off one of the most popular web series on the internet, Ryan Bergara and Shane Madej present BuzzFeed Unsolved Supernatural, 101 of the scariest, spookiest, and creepiest locations around the USA and a few abroad, with 50 percent brand-new content and locales exclusive to the book.
Hey there, demons! BuzzFeed Unsolved Supernatural has entertained viewers over the course of seven spooky seasons, covering the supernatural and otherworldly spirits, to ghosts, ghouls, unexplained paranormal activity, and everything in between. In their thrilling debut book, cohosts Shane Madej and Ryan Bergara (lovingly known as the “ghoul boys” to fans) deep-dive into dozens of haunted locations around the USA and a few abroad, including subjects from some of their most favorite and talked about episodes, as well as brand-new locations not previously seen before on their show.

As they explore the history behind haunted houses, creepy graveyards, former insane asylums, abandoned buildings, and horrifying hotels, Shane and Ryan use their trademark wit and humor to dissect each terrifying tale with their most hilarious highlights and biting commentary. So hold on to your hell-bound soul, boys and ghouls—it’s about to get demonic up in here.
#NovelSuspects #runningpressbooks #BuzzFeed #UnsolvedSupernatural
#RyanBergara #ShaneMadej #annaKatz #hauntings #supernatural
at September 05, 2022
Email ThisBlogThis!Share to TwitterShare to FacebookShare to Pinterest