At Home on Marigold Lane by Debbie Mason 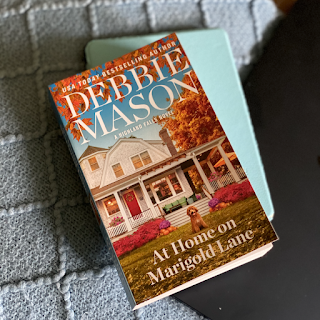 Releases September 27th ~ Get it on Amazon
https://amzn.to/3QM7Jis
"Breathe, just breathe."
Just because a marriage didn’t work out doesn’t mean you’re not capable of love. But when your job entails so much of what a marriage is made up of, and it fails, you feel as if you did something wrong.  Brianna MacLeod, a family and marriage therapist, is battling impostor syndrome as well as severe anxiety. A recovering survivor of domestic abuse free from her abuser, but not the overprotective reach of her well-intended family. This story is a lot. Anyone with triggers are warned. This deals with abuse and its after-effects.
“No situation is good or bad it’s how you react to it that matters.”
Debbie Mason gives an honest and real telling of surviving and the journey to recovery.

~Tanja
*Thank you to @Forever for sharing this title with me
From the Cover...
True love deserves a second chance.
For family and marriage therapist Brianna MacLeod, moving back home to Highland Falls after a disastrous divorce feels downright embarrassing. Bri blames herself for missing the red flags in her relationship and worries she’s no longer qualified to do the job she loves. But helping others is second nature to Bri, and she soon finds herself counseling her roommate and her neighbor’s daughter. Bri just wasn’t expecting them to reunite her with her first love . . .

Caleb Scott knows his failed marriage has been tough on his stepdaughter, so he’s grateful she’s found someone to confide in . . . even if it’s Bri MacLeod. Seeing Bri brings up feelings he’d thought were long buried. He knows it’s not the right time for either of them to be rekindling a relationship, but being with Bri feels right—like coming home. He’ll just have to convince her that risking her heart again might give them exactly what they both need . . . a second chance.
#AthomeonMarigoldLane #DebbieMason #ReadForever #ReadForeverPub #SecondchanceRomance #DomesticAbuse #FamilyTrauma
at September 27, 2022
Email ThisBlogThis!Share to TwitterShare to FacebookShare to Pinterest