Pledge of Allegiance by Timarie ~ The Finish Line Series 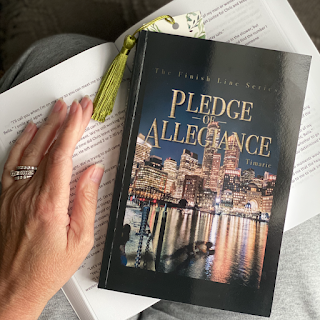 Get it on Amazon
https://amzn.to/3uXQWRs
There's nothing more satisfying than discovering new authors. Especially if I know I’m going to be in a long-term booklationship with them. Well, if adding books to my bookshelf is considered a relationship. ((LOL)) Timarie’s Pledge of Allegiance is a thoroughly enchanting surprise. I was immediately transported to the gritty yet amazing streets of Beantown. There is zero beating around the bush due to the must-read prologue. It gives you this heightened anticipation of events getting ready to unfold. Timarie sets a mood and tone that dares the reader to continue. A bit of Sopranos-meets good girl-meets sexy seduction.  Insta love via tragedy, but told so compellingly well that I can't wait to begin the second book, For Which it Stands. I'll keep you guys updated on my reading journey, but I can tell you one thing for sure. I am thankful to the wonderful Timarie for sharing her works with me and I’m excited for what’s to come.

From the Cover...
April 15, 2013, Patriots Day. The city of Boston, and all of the nation, was rocked by a terrorist attack at the historical Boston Marathon finish line. Among the lives affected by the tragedy are Michael Farino and Ireland Murphy. Neither could have predicted that the act of saving Ireland’s life would lead Michael on a journey of self-discovery, while a decades old war between their rival Boston crime families threatens their happiness and lives.
While pursuing their seemingly forbidden love, they realize a profound shared secret connection between the two that began before their births. Michael and Ireland will have to either pledge their allegiances to either their families, or each other.

Intense passion, secrets, betrayal, a complicated past and a life altering love affair are working against Michael and Ireland.

The finish line is just their beginning….
at July 20, 2022
Email ThisBlogThis!Share to TwitterShare to FacebookShare to Pinterest