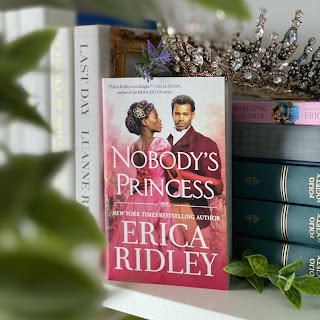 Releasing July 26th ~ Get it on Amazon
https://amzn.to/3v2fvgn
I love this series so much and having time to get to know Graham and Kuni has been an adventure. Nobody's Princess is filled with turmoil, laugh-out-loud moments, and an ending that had me cheering! Thank you Forever Publishing for sharing this with me. I'm overjoyed.
~Tanja
From the Cover...
Nothing happens in London without Graham Wynchester knowing. His massive collection of intelligence is invaluable to his family’s mission of aiding those most in need. So when he deciphers a series of coded messages in the scandal sheets, Graham’s convinced he must come to a royal’s rescue. But his quarry turns out not to be a princess at all… The captivating Kunigunde de Heusch is anything but a damsel in distress, and the last thing she wants is Graham’s help.

All her life, Kuni trained alongside the fiercest Royal Guardsmen in her family, secretly planning to become her country’s first Royal Guardswoman. This mission in London is a chance to prove herself worthy without help from a man, not even one as devilishly handsome as Graham. To her surprise, Graham believes in her dream as much as she does, which makes it harder to resist kissing him…and falling in love. But how can she risk her heart if her future lies an ocean away?
#NobodysPrincess #EricaRidley #TheWildWynchesters #readforeverpub #readforever #hachetteus #historicalromance #July26th

at July 25, 2022
Email ThisBlogThis!Share to TwitterShare to FacebookShare to Pinterest