Grace Under Fire by Julie Garwood 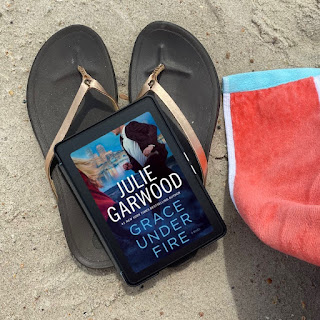 Releasing July 19th ~ Get it on Amazon
https://amzn.to/3QQscUy
Well, talk about a heart-racing adrenaline-filled kind of read. Grace Under Fire by Julie Garwood will have the reader running as fast as Grace McKenna and Michael Buchanan are when it comes to trying to solve the mystery within. Garwood has an innate ability to keep you invested and anxious for what’s to come at the end of every chapter. I love this long-running series and being able to visit past characters and get peaks into stories to come. It’s a fantastic read, especially for summer. Grab those beach bags and fill them full of Garwood books.
~Tanja
*Thank you to Berkley Publishing Group via Netgalley for sharing this title with me.

From the Cover...
Grace Isabel MacKenna has a hundred things to do today. Killing someone isn't one of them. It is supposed to be a quick visit to Boston for the Buchanan anniversary party, then on to Scotland to collect an inheritance. She checks into her hotel and then decides to go for a brisk walk. But after getting lost, she ends up with a wounded man stumbling into her arms—and his shooter coming after them both. When she fires back in self-defense, she doesn’t expect him to drop dead. After Isabel endures an interrogation by police, she is free to go, thanks to the Buchanans dispatching former Navy SEAL and now lawyer Michael Buchanan to assist her.

Isabel knows she should be grateful for Michael’s help, but since she’s harbored an extreme dislike for him for years, gratitude is difficult to muster. Michael has appointed himself her de facto guardian, and she’s stuck with him despite their constant bickering and sizzling attraction. Even when Isabel goes to Scotland to claim her inheritance, Michael follows her—but he isn’t the only thing she can’t shake. Mysterious threats against Isabel surface, and before they can deal with their growing feelings for each other, Michael and Isabel must first survive.
#Berkley #Berkley PublishingPublishingGroup #GraceUnderFire # JulieGarwood #Romance #BuchananRenardMacKenna #Romance #womensfiction
at July 15, 2022
Email ThisBlogThis!Share to TwitterShare to FacebookShare to Pinterest