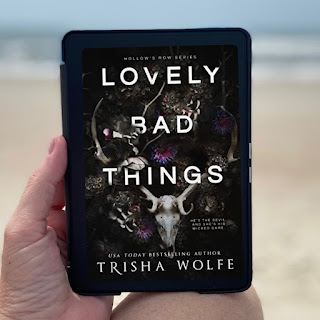 Out now ~ get it on Amazon
https://amzn.to/3QzQsu1
Trisha Wolfe is a mainline infusion of all things diabolical and disturbing! I have savored every book she produces. Lovely Bad Things is no exception and was an absolutely phenomenal read. Simply perfect for my week at the beach. Mrs. Wolfe is a self-proclaimed writing lunatic. She's truly a maestro of the macabre and a master of dark killer romance. If you’re a fan of the psychological and with a twist of darkness you’re going to absolutely love this one.
Amazing!
~Tanja
From the Cover...
He’s the devil. And she’s his wicked game.

An enemies-to-lovers dark romance with a thrilling twist from the disturbed mind that brought you the Darkly, Madly Duet.

Halen:
They say eyes are the windows to the soul—but when he looks at me through hues of slate-green and flaring blue embers, I’m terrified of what’s watching me from behind his clashing gaze, something primal and feverish that threatens to melt me like fire in ice.

But after I’m called to a crime scene to investigate the most gruesome act of violence to descend on the legendary town of Hollow’s Row, I have no choice but to turn to Kallum, to the man I had locked away in an asylum for the criminally insane.

He’s the leading expert on all things Nietzsche and occult. And now, to get answers, I’m forced to make a deal with the devil himself.

Kallum:
Really, eyes are the windows to the soul? Then I wonder what little Halen St. James thinks of all the cryptic eyes watching her in the killing fields… I wonder if the hairs on her delicate nape lifted away, if a thrilling shiver raced over her soft skin. She’s desperate for the answer, and she’ll do anything to uncover it—even make a deal with me, dangling freedom like bait on a hook.

But she’s far more tempting to sink my teeth into than any lure.

And the pain will taste twice as sweet.

CW: Serial killers. Crime scenes. Dark themes. Violence. Murder. Blood and sharp object play. Occult references. Loss of loved ones. As this is dark romance, there are likely other dark themes and situations, so please read responsibly.
at June 21, 2022
Email ThisBlogThis!Share to TwitterShare to FacebookShare to Pinterest