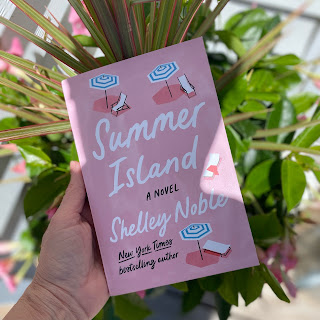 Out Now! Get it on Amazon
https://amzn.to/3LHIj41
Beach bag perfection! I mean... Shelly Noble knows her stuff and masters it every time. A beautiful story of family, life, and reinventing yourself. I love everything about this. A perfect novel for summer.
~Tanja
From the Cover...
When reporter Phoebe Adams loses her job and her fiancé on the same day, it never occurs to her that she’ll also have to support her mother, Ruth, through her divorce from Phoebe’s father after thirty-five years of marriage. They both need a safe haven, and Phoebe knows just the place—Summer Island where Grandma Alice still rules the roost from the big New England beach house Phoebe and Ruth once called home.

But “home” has changed. There’s a trendy new look downtown. Large beach houses are replacing the old; the Harken house next door is in disrepair.

Phoebe’s plan for a peaceful retreat is quickly hijacked when globe-trotting Great Aunt Vera makes an unannounced pit stop. With Vera around, no one can stay morose for long, not even Lars, the grumpy widower next door, or his son Ty, formerly geeky middle child all grown up into a handsome and enigmatic man. Soon they’re all enjoying things they used to do and discovering new ones. Each adventure opens a part of themselves they’ve neglected for too long and brings them closer together.

But when an accident threatens to destroy the tenuous tie between them, Phoebe realizes how fragile life can be, and that she has some serious choices to make about her own life. It will take the support of her newly awakened family and the magic of Summer Island for Phoebe to embrace the challenge of an unexpected future and to trust her own heart.

In Summer Island, Shelley Noble once again creates a thought-provoking and life-affirming beach read that will stay with you long after the last tan of summer fades.
*Thank you to @Avonbooks @HarperCollins for sharing this title with me!
#summerisland #avonbooks #happilyeveravon #readavon #ShelleyNoble #outnow #booksta
at May 11, 2022
Email ThisBlogThis!Share to TwitterShare to FacebookShare to Pinterest