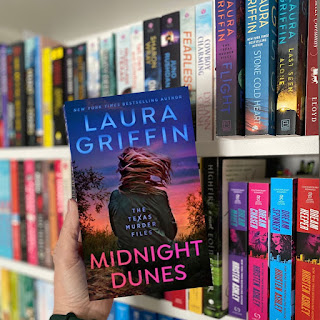 Get it on Amazon
https://amzn.to/3vwIVnW
Midnight Dunes by  Laura Griffin is coming on May 24th and it's another fantastic addition to the Texas Murder Files series! When a local resident turns up dead detective Owen Breda is on the case. Lost Beach is a small coastal town in the state of Texas and things like this don’t normally happen. Macey Burns has come to Lost Beach in hopes of starting her own publicity company. She’s been hired by the city to make a tourism video. This will be a redemption of sorts for her. After a bit of personal and professional scandal, Macey needs to do the things she loves and do it on her own terms. She’s hoping this job with the city will be a launching pad for a new business. What she doesn’t know is, she's rented a beach house where the recently deceased resident used to live. The fact that the previous tenant was murdered brings an underlying feeling of unease for Macey. The only stable thing going on is her ability to constantly run into Detective Breda. An attraction is there but is it convenient or conducive to her new plan and career path? What we do know for sure is that there is chemistry only Laura Griffin can create. A smart coupling that will help uncover a murder mystery. Griffin has a spectacular way of telling a story and this reader will forever be a fan.
~Tanja
*Thank you to Berkley Publishing via NetGalley for the ARC
From the Cover...
When the shocking discovery of a murdered woman’s body disturbs the tranquility of tourist season, the police detective in charge of the puzzling case must work alongside the new filmmaker in town to pursue every lead in the new romantic thriller from New York Times bestselling author Laura Griffin.

After a scandal derails her television reporting career, Macey Burns comes looking for a change of pace in Lost Beach, Texas. She’s ready to focus on her first passion—documentary filmmaking—and has a new job working for the island’s tourism board, shooting footage of the idyllic beachside community. Her plans for a relaxing rebound are dashed when she realizes the cottage she’s renting belonged to the woman whose body was just found in the sand dunes.

Detective Owen Breda is under intense pressure to solve this murder. Violent crimes are rising in his small town, and he can’t stand to see anyone else hurt…especially not the beautiful documentarian who keeps showing up at the precinct.

With the clock ticking, cameras rolling, and body count climbing, Macey and Owen must use all their resources to find the killer without getting caught in the crosshairs.
[ID: I am holding a copy of the book in front of a bookshelf filled with brightly colored books as well as previous books in Laura Griffins book series]
at May 23, 2022
Email ThisBlogThis!Share to TwitterShare to FacebookShare to Pinterest