Death of The Black Widow by James Patterson 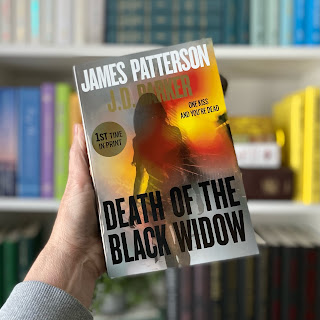 Out Now ~ Get it on Amazon
https://amzn.to/3L3xJD4
Released in April this massive work from the amazing James Patterson is now in paperback and ready for all the beach bags and backpacks of summer. Patterson knows how to craft a story and keep the reader guessing. I am forever a fan. Death of The Black Widow is engaging and kept me up to the wee hours. I can't recommend it enough!
~Tanja
From the Cover...
She destroys the men she loves—and escapes every time. The most dangerous killer James Patterson has ever created is also his most seductive.
On his first night with Detroit PD, Officer Walter O’Brien is called to a murder scene. A terrified twenty-year-old has bludgeoned her kidnapper with skill that shocks even O’Brien’s veteran partner. The young woman is also a brilliant escape artist. Her bold flight from police custody makes the case impossible to solve—and, for Walter, even more impossible to forget.

By the time Walter’s promoted to detective, his fascination with the missing, gray-eyed woman is approaching obsession. And when Walter discovers that he’s not alone in his search, one truth is certain. This deadly string of secrets didn’t begin in his home city—but he’s going to make sure it ends there.
*Thank you to @GrandCentralPub @Hachettebookgroup for sharing this title with me. #grandcentralpub #GCP #GrandCentralClubCar #Hachettebookgroup #Jamespatterson #DeathofTheBlackWidow #booksta #GCPCLUBCAR
at May 12, 2022
Email ThisBlogThis!Share to TwitterShare to FacebookShare to Pinterest