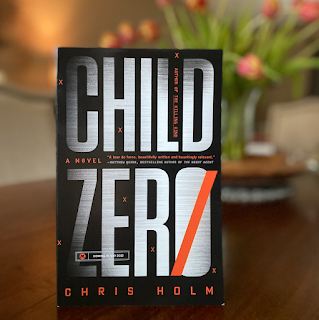 Out Today~ Get it on Amazon
https://amzn.to/3vZWgVt
oh. mah. gah. Talk about a captivatingly thrilling read. Geez Chris Holm, are you trying to damage us? In the best possible way.  I am at a loss for words. What I can say is grab it today and jump in.
~Tanja
From the Cover...
It began four years ago with a worldwide uptick of bacterial infections: meningitis in Frankfurt, cholera in Johannesburg, tuberculosis in New Delhi. Although the outbreaks spread aggressively and proved impervious to our drugs of last resort, public health officials initially dismissed them as unrelated.
They were wrong. Antibiotic resistance soon roiled across the globe. Diseases long thought beaten came surging back. The death toll skyrocketed. Then New York City was ravaged by the most heinous act of bioterror the world had ever seen, perpetrated by a new brand of extremist bent on pushing humanity to extinction.

Detective Jacob Gibson, who lost his wife in the 8/17 attack, is home caring for his sick daughter when his partner summons him to a sprawling shantytown in Central Park, the apparent site of a mass murder. Jake is startled to discover that, despite a life of abject squalor, the victims died in perfect health—and his only hope of finding answers is a twelve-year-old boy on the run from some very dangerous men.
*Thank you to @Mulhollandbooks @Novelsuspects and @Hachettebookgroup
#novelsuspectsinsider #novelsuspects #childzero #Chrisholm #HardScienceFiction
at May 10, 2022
Email ThisBlogThis!Share to TwitterShare to FacebookShare to Pinterest