Blame It on the Brontes Annie Sereno 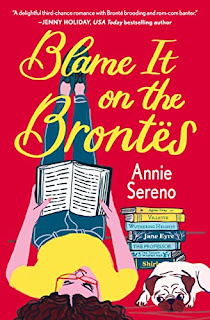 OUT NOW! Get it on Amazon
https://amzn.to/3KAnMOk
I’m not sure where to begin. From the get-go, Athena Murphy is rather grumpy and ill-tempered. At first, I thought it was nervousness and having to meet up with her ex, but sadly no—she’s just kind of unlikable and grumpy all around. There’s a negativity about her that I don't like, but with any new book, you’ve got to give characters time to evolve, change, and become more, right?
This one’s a quandary for me. To be honest, my feelings for our main character didn’t improve. However, when you meet her mother you begin to understand why she is the way she is. Her mother shames her for eating Girl Scout cookies with a quip of “a moment on the lips, a lifetime on the hips.” She herself shames her ex by patting his tummy and saying “you’ve gained a few pounds" without provocation. That type of stuff I’ve never been a fan of. It’s just body shaming for the sake of it. It's something I don't care for.

Having said all that—I’ve spent two full days unable to put this book down! I mean, I think the title gives much of this away. Blame it on Brontë. A group of insufferable people that aren’t very nice, but for whatever reason, you’re invested in their lives and what’s going to happen next. What did I actually love about this book? The cast of secondary characters. Everyone in the sandwich shop! It's the quintessential Hallmark movie town. I want to be at all the town events, take part in all the holiday parties, listen to the town gossip, and share stories with these people. They were perfection in my book. Anywho... I can’t wait for others to enjoy the “love-hate trope” along with me!
~Tanja


From the Cover...
She’s going to write her own happy ending.

English professor Athena Murphy is an authority on the novels of the Brontë sisters. But as they say in academia, publish or perish. To save her job, Athena decides to write a biography of C.L. Garland, the author heating up bestseller lists with spicy retellings of classic literature. Tracking down the reclusive writer and uncovering her secret identity, though, means Athena must return to her small midwestern hometown where Garland—and her ex-boyfriend, Thorne Kent—live.

Seeing Thorne again reminds Athena that real life never lives up to fiction. He was the Heathcliff to her Catherine, the Mr. Rochester to her Jane. Not only did their college breakup shatter that illusion, but they also broke each other’s hearts again a second time. Now she has to see him nearly every...single…day.

The only solution is to find C.L. Garland as quickly as possible, write the book, and get the heck out of town. As her deadline looms and the list of potential C.L. Garlands dwindles, Athena and Thorne bicker and banter their way back to friendship. Could it really be true that the third time’s a charm?

Athena and Thorne have a love story only a Brontë could write, and the chance for their own happily-ever-after, but first, they’ll need to forgive the mistakes of the past.
at May 03, 2022
Email ThisBlogThis!Share to TwitterShare to FacebookShare to Pinterest