The Other Half of the Grave by Jeaniene Frost 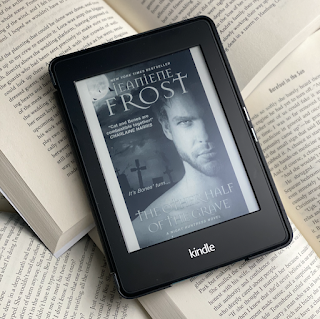 Releasing April 26th
Get it on Amazon ~ https://amzn.to/3x0sZLf
Nostalgia. Nostalgia is exactly what I’m feeling while reading The Other Half of the Grave by Jeaniene Frost. It’s been so many years since I’ve been able to slip into this world. Excuse me while I give a little backstory folks. My book bestie Kathy and I started our blog in January 2013. We started it after we connected over Twilight and then we moved to Charlene Harris and from Charlene, we went straight into Jeaniene Frost's Cat and Bone's series. We read and reread these books over and over.
Kathy and I met while our families were both stationed in England so Bone's cavalier British accent and “devil may care” hit a chord with both of us since we were now living back in the states and missing life in the UK terribly. So when I saw that Frost is releasing book one from Bone's POV I immediately jumped at the chance to read it. The thing I didn't expect was to be immersed in memories of my friend. We lost Kathy a few years ago to breast cancer. And as I read this book I had so many memories of the first time we read and discussed this book. The discussions, laughter, pouring over our reviews, and comparing our notes... there’s just so much.
So my “book review”  is five stars because I love everything Jeaniene Frost, but the memories, love, friendship, and the sharing I was able to do with my best friend over these books are immeasurable. I don’t really realize just how much I truly missed my friend until something comes up and I’m not able to share it with her. It’s a melancholy sadness, yet I’m grateful to be able to revisit these forgotten memories I had with my friend. Anyway… bouncing lucifers balls this was good. I thank you, Jeaniene Frost, with tears and a smile.
~Tanja
*ARC provided by the publisher via Netgalley
From the Cover...
From the New York Times bestselling author of the Night Huntress series comes a thrilling new look at the iconic origin story of Cat and Bones, as experienced by Bones…from the other half of the grave.

There are two sides to every story–and the sizzling British alpha vampire, Bones, has a lot to say…

Ever wondered what Bones was thinking and feeling when he and half-vampire Cat Crawfield first met? Or how their story might differ if he were the one telling it? Now, relive the beginning of Cat and Bones' bestselling love story through Bones' point of view, which reveals a darker, sexier take on their early days, as well as a deeper dive into Bones' past, the vampire world, and other things that Cat didn't see when their story was told only through her eyes in Halfway to the Grave.

Cat had her say. Now, it's Bones' turn.
[IMG: Book cover with a night scene of a graveyard behind Bone's]
at April 25, 2022
Email ThisBlogThis!Share to TwitterShare to FacebookShare to Pinterest