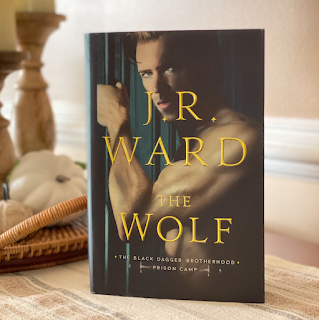 Out Now - Get it on Amazon
https://amzn.to/3DqqJNX

I love how the beginning of every one of JR wards books begins with us immersed in a different situation. The dark gritty surroundings immediately sets the mood, the pace, and gives you a bit of foreboding excitement for what’s to come. J.R. Ward has the ability to immediately immerse the reader in everything new and exciting. The Wolf shows us the underbelly of the black dagger brotherhood world. The brotherhood, as well as the reader, searches for what’s happening in the dark corners of Cawldwell. We catch glimpses of beloved and new characters in previous books. It makes The Wolf a terrifying and exciting read. I am thrilled about what’s to come in this world. Sharpen those claws and hold tight book friends The Wolf will have you howling with excitement.

In the next installment of bestselling author J.R. Ward’s Prison Camp series, things get steamy when Lucan, a wolven forced into bartering drug deals for the infamous Prison Colony, meets Rio, the second in command for the shadowy Caldwell supplier, Mozart. After a deal goes awry, a wolf with piercing golden eyes swoops in to save her from certain death. As shocking truths unfurl, Rio is uncertain of who to trust and what to believe—but with her life on the line, true love rears its head and growls in the face of danger.
*Thank you to Gallery Books and Simon & Schuster for sharing this title with me.
#TheWolf #JRWARD #BDB #blackdaggerbrotherhood #prisoncamp #outnow #gallerybooks #simonschuster
at November 20, 2021
Email ThisBlogThis!Share to TwitterShare to FacebookShare to Pinterest