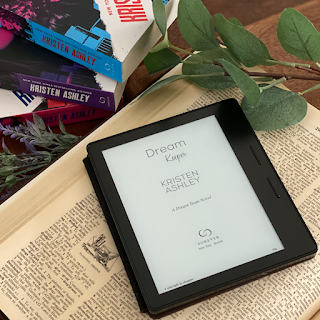 Releasing November 30th! Get it on Amazon
https://amzn.to/3kb7osC
Book four in the Dream Team series features the long-awaited coupling of Auggie and Pepper. Little Juno has a plan and she has enlisted the help of a very surprising ally. Dream Keeper is yet another fabulous read from author Kristen Ashley. I love her writing and storytelling so much. It just feels like coming home. You just know you're in good hands. She gets all the hearts and stars for this one.
~Tanja
From the Cover...
Spinning off from the bestselling Dream Man and Rock Chick series, this is the emotional and steamy contemporary romance fans of the Dream Team series have been waiting for!
He’s perfect—but he can’t be hers.

Pepper Hannigan is determined to keep any romance off the table—and out of her bedroom—while her daughter Juno is still young. Sure, a certain handsome commando is thoughtful, funny, and undeniably hot, but Pepper’s had her heart broken before, and she won’t let it happen again. Not to her or her little girl, even if this hero could melt any woman’s resolve.

Augustus “Auggie” Hero can’t deny his attraction to beautiful, warm-hearted Pepper or how much he wants to make a home with her and her little girl, but Pepper’s mixed signals have kept him away. That is, until Juno decides to play matchmaker. Her efforts finally bring Pepper into his arms, but they expose the danger Pepper is in. To protect Pepper and Juno, Auggie will have to live up to his last name and prove happy endings aren’t just for fairy tales.
*Thank you Forever Publishing for sharing this title with me.
at November 29, 2021
Email ThisBlogThis!Share to TwitterShare to FacebookShare to Pinterest