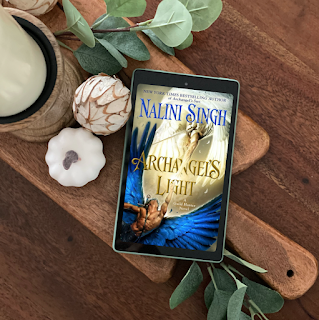 Releases October 26th - Get it on Amazon
https://amzn.to/3CLmpJ8
Oh my gosh! I don't think I will be able to covey just how much gratitude I feel for Berkely Publishing for giving me the chance to read Archangels Light prior to publication. It's one of the most anticipated reads of 2021 and I am agog at the honor of reading!
The amount of chatter and excitement surrounding Archangels Light has been one of the most fevered topics in the PNR book world. I am beyond thrilled to say that it was everything I wanted and more. The dual perspectives in time and the switching POV of both Aodham and Illiam as they grow and have experienced were absolute perfection.
Getting to see how many of the Seven played a role or interacted with both was heartwarming and just strengthened the way I feel about them all as a unit. I loved it so much I have already read it twice. I can't wait for everyone to read it. October isn't far away now.
~Tanja
From the Cover...
Nalini Singh returns to the world of the Guild Hunters for the most highly anticipated novel of the beloved series—a love story so epic it’s been half a millennia in the making…
Illium and Aodhan. Aodhan and Illium. For centuries they’ve been inseparable: the best of friends, closer than brothers, companions of the heart. But that was before—before darkness befell Aodhan and shattered him, body, mind, and soul. Now, at long last, Aodhan is healing, but his new-found strength and independence may come at a devastating cost—his relationship with Illium.

As they serve side by side in China, a territory yet marked by the evil of its former archangel, the secret it holds nightmarish beyond imagining, things come to an explosive decision point. Illium and Aodhan must either walk away from the relationship that has defined them—or step forward into a future that promises a bond infinitely precious in the life of an immortal…but that demands a terrifying vulnerability from two badly bruised hearts.
at October 25, 2021
Email ThisBlogThis!Share to TwitterShare to FacebookShare to Pinterest