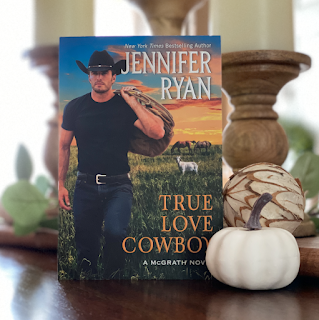 A McGrath Novel - An Avon Books Contemporary romance - Book#3
Released Aug 24th-Get it today on Amazon.
https://amzn.to/3i3caqC
Jon Crawford is back in Big Sky Country. He's got too much on his plate to even think about romance. That is until Trinity McGrath comes along. There is so much interpersonal drama going on between Jon and Trinity, but it's their own separate issues that encompass the majority of this real read. But I do love a good realistic romance with the added bonus of love concurs all in the end. A great read.

* Thank you to Avon Books + HarperCollins for sharing this title with me.
From the Cover...
Jon Crawford has returned to Montana, determined to take over his father’s ranch and raise his daughter in Big Sky Country, leaving the big-city life behind once and for all. He doesn’t have time to fall in love, but he doesn’t count on stubborn but beautiful Trinity McGrath, who arouses his protective instincts even as she tries to push him away.

Life hasn’t always been easy for Trinity, but now she has everything she needs—her family, friends, and a safe and secure life. With a business to build, Trinity doesn’t have time for romance…until Jon comes barging into her life and all her intentions are turned upside down!

Still, an attraction like theirs is too powerful to deny, and sometimes true love comes along when you least expect it. But when someone from Jon's past comes back with a vengeance, Trinity and Jon will have to do everything they can to save themselves and their new love...
at September 23, 2021
Email ThisBlogThis!Share to TwitterShare to FacebookShare to Pinterest