Witches Get Stitches by Juliette Cross 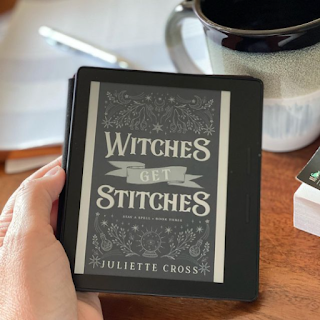 Releasing July 20th
Get it on Amazon
https://amzn.to/2T7rRUl
I spent my Sunday in the supernatural world of the Savoie sisters. Violet Savoie to be exact. From the get-go Violet comes at you full force. She's kick-ass and sexy. Smart-mouthed and quick-witted. You are instantly drawn to her and her overall presence. And then there's Nico Cruz.
"Ever heard that phrase when time stood still? I'd never felt it myself, until that moment.   --Was he the one?"
Nico is playing the long game. He knows he has to. For the majority of Witches get Stitches we get to indulge in a deliciously edible slow burn. Romance aside, the backstory and subplot make me hungry for more. I am excited for what's to come and love how the Stay A Spell world is expanding and moving.
I would be amiss not to mention the rest of the Savoie sisters and their loves. We get to have snippets and a few revelations from the couples previously showcased in the series and a massive, I feel, reveal of what's to come in the future. Cross has set this up to possibly become a very long-running series if she chooses. Especially with the addition of a few interesting new characters. There is one scene in particular that involves a boat that has me envisioning JJ and John B from the Netflix show Outer Banks. Google images you won't be sorry ((smile)) 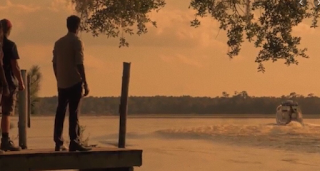 Magic, mystery, and mayhem. It's all soooo good! I can't wait for the release!
~Tanja
P.S. When do we get Jules and Ruben?? I'm dying over here!!!
From the Cover...

Violet Savoie has a plan. A dream, rather. To open her own tattoo shop, which caters to supernaturals in need of permanent charms. As a powerful Seer, she has the potent magic to cast every kind of spell. Except the kind to give werewolves control over their beastly side. And her business partner Nico needs help in the worst kind of way.
Nico Cruz has a secret. A motive, rather. To subtly stalk and seduce Violet until she finally recognizes they are fated to be together. Ever since their heated encounter in Austin on New Year’s Eve two years earlier, he’s been dying to get his hands—and his tongue—back on her body. He knows a woman like Violet can’t be courted in the usual way. Luckily, Nico has no scruples about misbehaving to get what he wants.

But when his former pack roams into town, and an old friend is far too interested in Violet, his focus shifts to the threat venturing into his territory. Nico may come across as the quiet, broody one, but the intruders are about to regret stepping foot in New Orleans. And when Violet goes missing, no charm or spell can keep Nico’s wolf at bay.
at July 16, 2021
Email ThisBlogThis!Share to TwitterShare to FacebookShare to Pinterest