The Nature of Witches by Rachel Griffin 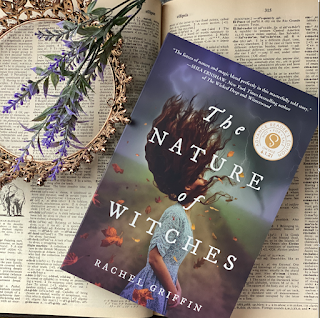 Out Now! Get it on Amazon
https://amzn.to/2SRyLxd
I can't thank Sourcebooks Fire enough for sending The Nature Of Witches to me! I won it as part of a giveaway during Bookfest hosted by Edelweiss. I have heard so much buzz and have been told countless times that this is a must-read. Well, book friends, I'm finally diving in. If you've read this please let me know your thoughts. No spoilers!!
I'll update after I've finished reading.
~Tanja
From the Cover...
For centuries, witches have maintained the climate, but now their control is faltering as the atmosphere becomes more erratic; the storms, more destructive. All hope lies with Clara, a once-in-a-generation Everwitch whose magic is tied to every season.

In Autumn, Clara wants nothing to do with her power. It's wild and volatile, and the price of her magic―losing the ones she loves―is too high, despite the need to control the increasingly dangerous weather.

In Winter, the world is on the precipice of disaster. Fires burn, storms rage, and Clara accepts that she's the only one who can make a difference.

In Spring, she falls for Sang, the witch training her. As her magic grows, so do her feelings, until she's terrified Sang will be the next one she loses.

In Summer, Clara must choose between her power and her happiness, her duty and the people she loves...before she loses Sang, her magic, and thrusts the world into chaos.
*Thank you to Sourcebooks Fire for sharing this title with me.
at July 22, 2021
Email ThisBlogThis!Share to TwitterShare to FacebookShare to Pinterest