The Matchmaker Bride by Ginny Baird 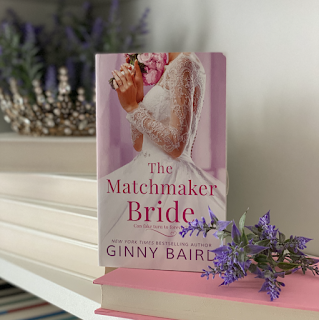 Releasing July 27th
Get it on Amazon
https://amzn.to/3eAaJhQ
Oooooooh (smirky smile) This is all the good book trope things rolled into one! Can you say, enemies to friends/pretend couple/friends to lovers and so much more. I fell in love with Ginny Bairds sweet and romantic storytelling when I read The Duplicate Bride last year. To say I have been excited about this release is an understatement.
Meredith Galane, and her disaster of a love life, delivers herself to the front door of laid-back boat maker Derrick Albright. The combination of chemistry and somewhat questionable plans make for a fabulous read!
The Matchmaker Bride is a fun and enjoyable read. Perfect for those beach bags!
~Tanja
From the Cover...
Successful Boston matchmaker and television personality Meredith Galanes’s reputation is on the line. During a guest appearance on a morning talk show, she’s broadsided by questions about her own romantic attachments, just as she’s trying to secure a syndication deal. Afraid to admit her love life is a total disaster, Meredith blurts out that she’s seriously involved with a very special man—a boatbuilder in Maine. She never expects that small slip to get spun into a story about her supposed engagement.
Or that the paparazzi will track the guy down…

Derrick Albright is laid-back about many things. Being hounded by the press about some imaginary engagement to a woman he’s only met once—and couldn’t stand—isn’t one of them. Then Meredith actually shows up at his cabin in Blue Hill, Maine, with an apology, a pot roast, and a proposal—play along until she secures her TV deal, and she’ll help him win back his ex.

It’s a simple plan, but if they have any chance of pulling it off, they’ll have to survive each other first...

Each book in the Blue Hill Brides series is STANDALONE:
* The Duplicate Bride
* The Matchmaker Bride
*Thank you so much to Entangled Publishing for sharing this title with me!
at July 25, 2021
Email ThisBlogThis!Share to TwitterShare to FacebookShare to Pinterest