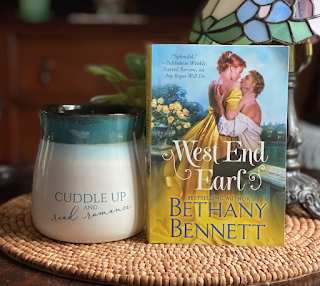 Releasing June 29th
Get it on Amazon
https://amzn.to/3iGse2D

Oh, you guys! Just like with book one, when I started I couldn't stop. I blew through West End Earl within hours of receiving it.  Move over Bridgerton fans Bethany Bennett is coming through!

I do love a man who is good and kind. One who does his best to take care of his friends and family. Even to his own detriment. Calvin, Earl of Carlyle, has the money and station to help those he needs to help.  He just never suspected the one person he thought of as a friend was altogether someone else entirely.

As for the lovely Ophelia... well. Her cover is about to be blown!

As I said before, I absolutely loved this. I can't wait for more in the Misfits of Mayfair series.

*Thank you to Forever Publishing for gifting me this title.

From the series guaranteed to "win the hearts of Regency fans” comes a story of secret identities, unlikely love, and forbidden romances that will warm even the coldest of hearts (Publishers Weekly).

While most young ladies attend balls and hunt for husbands, Ophelia Hardwick has spent the last ten years in disguise. As the land steward for the Earl of Carlyle, she’s found safety from the uncle determined to kill her and freedoms a lady could only dream of. Ophelia’s situation would be perfect—if only she wasn’t hopelessly attracted to her employer.

Calvin, Earl of Carlyle, is determined to see his sister married this season. And he’ll do it with the help of his trusted right-hand man. But when he finds out Ophelia's secret, and that her life is in danger, his priorities change. Their attraction is passionate, all-consuming, and if they aren’t careful, it could turn downright deadly—for both of them.
at June 21, 2021
Email ThisBlogThis!Share to TwitterShare to FacebookShare to Pinterest