The newly made apocalyptic world created by the Scorpius Syndrome is one filled with so much deceit, uncertainty, and death; people will do anything to survive and save the ones they love. Raze Shadow will certainly do anything for those he is loyal to, including betraying the people who have taken him in. 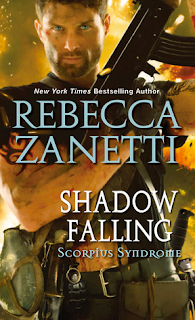 Raze Shadow is a solider. He’s one of the best and he is beginning to feel cracks in his armor for the one person he needs in order to finish his hidden mission. It will be an epic betrayal and he’s certain he won’t survive the fallout.

Vivienne Kennedy, an FBI profiler who was drugged, beaten, and tortured by the crazed president is now living in Vangaurd. She stays on the outskirts away from the others, hiding from the pain and hiding her own screams that wake her nightly. Is she going crazy? All the drugs still coursing through her veins make her feel on edge, hear voices, and see people she knows no longer live. One man is making an effort to help. He is gruff and strong. He also makes her feel something other than terror. Her aftermath is a struggle for sanity, belonging, and ultimately for survival.

Living in a world torn apart by this virus and watching those infected with it having to cope with the aftermath is a telling of human nature. Bringing out the best and absolute worst in people. It’s a harrowing journey. One filled with action, mystery, and intrigue.

Shadow Falling has a sense of familiarity in the plot, but has a nice twist that makes it fresh and highly engaging to read. Add in the always present alpha males and smart capable women. It’s a signature Zanetti read.

Get it on Amazon

Before the Scorpius Syndrome tore through North America and nearly wiped out the population, Vivienne Kennedy was the FBI’s best profiler. The bacteria got her anyway. But she survived. She recovered. And when she woke up from a drug-nightmare of captivity, her skills as a hunter of men had gone from merely brilliant to full-on uncanny. Her mysterious rescuer wants her to put them to the test. But no matter how tempting he is, with his angel’s eyes and devil’s tongue, Vinnie knows she shouldn’t trust him.

If the FBI were still around they would rate Raze Shadow as one of the bad guys. His military training can’t wipe out his association with the Mercenaries, the most feared gang in a thousand miles. His loyalties are compromised. He won’t even tell Vinnie his real name. But there’s no FBI in the new America of fear and firepower, only instinct and risk.

And the way his arms wrap around Vinnie tells its own story. Whatever else Raze is concealing, he can’t hide his desire . . . 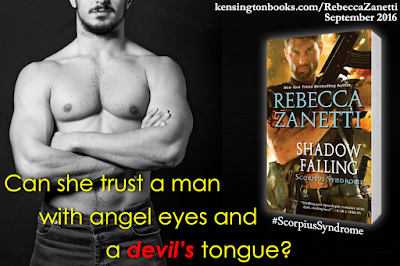 Vinnie closed her eyes and tried to even out her breath and fall asleep, but the hard body enfolding her held too much intrigue.  And he was hard.  Smooth muscle, powerful lines, sinewed and strong.  While many bodies had grown streamlined and become more powerful after surviving Scorpius, Raze was all man, perfectly uninfected.
She’d seen pictures in sports magazines of bodies like his, but she’d never had one wrapped around her before.
For once, she managed to keep her mouth closed and didn’t ask him all the questions roaring through her damaged brain.  He breathed softly against her hair, relaxed in sleep and yet still somehow on alert.
She could feel his concentration, lumbering beneath the surface of slumber.
He hadn’t wanted to comfort her, and she had felt his hesitation.  But something good lived in Raze Shadow, and he’d been unable to turn away from a woman in pain.
Oh, a conflicting force drove Raze, and he hid it well.  But at some point, his true agenda would become clear.
See if you can read his mind.
Vinnie’s eyelids slid open to see Lucinda perching cross-legged at the edge of the bed.  Shoot.  She’d hoped somehow Raze’s presence would keep the hallucinations at bay for the night.  “No,” she mouthed.
Lucinda shook long blond hair, and her dark blue eyes seemed to deepen.  “You can read minds now,” she said, voicing one of Vinnie’s unspoken fears.
“No, I can’t,” Vinnie mouthed back, careful not to make a sound.  If Raze awoke and saw her talking to imaginary people, he’d tell Jax, and then she wouldn’t get to work in headquarters and be around people.  “Go away.”
Lucinda pursed her lips.  “I read minds my whole life.”
“You were schizophrenic,” Vinnie mouthed back.  “It wasn’t real.”
“Now who’s seeing people who aren’t real?”  Lucinda returned, smoothing down her long velvet skirt.  “Your father’s people hail from mystic gypsies, and you know it.”
Vinnie rolled her eyes.  “We’re from Sweden.”
Her step-mother shook her head again.  “No.  Your Great Grandma Vinilula was a gypsy.  My ancestors were gypsies, too.  That’s why your dad and I were drawn together.”
“You imagined that gypsy connection.  Now go away.”  Vinnie closed her eyes.  Lucinda had died ten years ago in a mental hospital, when Vinnie was in her early twenties.  “You can bother me after I get some sleep.”  She yawned, and her jaw cracked.
“I’m not leaving until you try to read his mind.  He’s sexy.  I bet he’s dreaming about—”
“Fine.”  Vinnie clenched her jaw.  “I’ll try.”  She deepened her breath and tried to focus on Raze’s mind.
Nothing.  No sights, no sounds, no images.
Relief washed through her, and she opened her eyes.  “His mind is a steel trap.”  There was no way she could read minds.  All the images and thoughts lately that weren’t her own were a byproduct of the truth serum drugs and not a new ability.  Thank goodness.
Lucinda crossed her arms over a fluffy peasant blouse.  “Try again.”
“No.”  Vinnie closed her eyes and wished the hallucination away.  She knew she should be worried about her tenuous mental state, but for the moment, she just felt too warm and too good with the dangerous soldier holding her close.  Life sucked right now, so why not take a pleasurable moment and enjoy it?
“If you’re going to sleep with that man, you should really wax your legs,” Lucinda whispered.
“I’m not going to sleep with him,” Vinnie mumbled.
“You’re sleeping with him now.  I was talking about sleeping, and you were thinking about sex.  Interesting,” Lucinda stage whispered.
Vinnie cringed and then remembered Raze couldn’t hear Lucinda.  She couldn’t even hear her step-mom since the woman didn’t exist.  God, life had gotten confusing.  Besides, sex was off the table.  “He hasn’t been infected,” Vinnie mumbled.
“He will be.”
Vinnie’s eyelids opened again, but the end of the bed was now empty.  Well, it had been empty the entire time, but at least she’d stopped seeing dead people.  For now.
I see dead people.  The line from a famous movie whispered through her mind, and she chuckled just like an insane person would.
Raze murmured and pulled her even closer into his warmth, his long length bracketing her.   She wiggled a bit and then stopped as her rear end brushed across a definite erection.
Whoa.
“Don’t worry about it,” Raze mumbled sleepily.  “I’m too tired to do anything, so stop talking to yourself and go to sleep.”  His breathing instantly leveled out.
She hadn’t exactly been talking to herself.  Well, she had, but not really.  Right?  “I’m crazy,” she whispered into the night.
For once, the night didn’t answer.

New York Times bestselling author Rebecca Zanetti has worked as an art curator, Senate aide, lawyer, college professor, and a hearing examiner—only to culminate it all in stories about Alpha males and the women who claim them. She is a member of RWA, has won awards for her works throughout the industry, and has a journalism degree with a poly sci emphasis from Pepperdine University as well as a Juris Doctorate from the University of Idaho.
Growing up amid the glorious backdrops and winter wonderlands of the Pacific Northwest has given Rebecca fantastic scenery and adventures to weave into her stories. She resides in the wild north with her husband, children, and extended family who inspire her every day—or at the very least give her plenty of characters to write about.

at August 29, 2016
Email ThisBlogThis!Share to TwitterShare to FacebookShare to Pinterest