The tag line is “These Royals will ruin you” They aren’t lying. 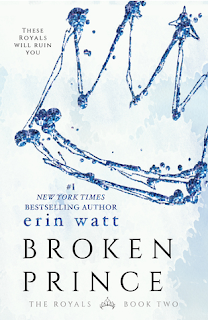 Two days after reading and I still have my mind firmly planted in a teenage angst filled world where money dictates your place in prep school hierarchy. SO much decadence and power at a young age breeds a cunning ruthlessness that’s beyond the normal. It’s like J.R. Ward’s Bourbon Kings: the teenage years.

We get a dual POV and I am so happy about this I can’t contain it. Reed. Oh my Reed. Having his perspective in the final moment of Paper Princess is a brilliant way to start off the Broken Prince. Immediate knowledge is what the rabid fans need after the cliffhanger ending we were smacked with before.

Spoilers? Nope. Not getting them from me. But I will give you some bullets points.
A Royal on his knees
A few jaw-dropping secrets revealed
Laugh out loud moments abound
Comeuppance served
Eyes opening and starting to see
Shock and awe
That’s it. No more. Do yourself a favor: go in blind, don’t read spoilers, don’t ask too many questions, and try not to ruin it for yourself. That’s the best part about book crack like this. It leaves you breathless, angry, appalled, and beaten. It also keeps you coming back for more. And I’m a glutton for this kind of read.

From wharf fights and school brawls to crumbling lives inside glittery mansions, one guy tries to save himself.

Reed Royal has it all—looks, status, money. The girls at his elite prep school line up to date him, the guys want to be him, but Reed never gave a damn about anyone but his family until Ella Harper walked into his life.

What started off as burning resentment and the need to make his father’s new ward suffer turned into something else entirely—keep Ella close. Keep Ella safe. But when one foolish mistake drives her out of Reed’s arms and brings chaos to the Royal household, Reed’s entire world begins to fall apart around him.

Ella doesn’t want him anymore. She says they’ll only destroy each other.
She might be right.

Secrets. Betrayal. Enemies. It’s like nothing Reed has ever dealt with before, and if he’s going to win back his princess, he’ll need to prove himself Royally worthy.


at June 25, 2016
Email ThisBlogThis!Share to TwitterShare to FacebookShare to Pinterest