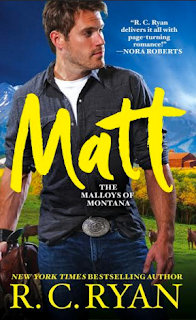 A MALLOYS OF MONTANA NOVEL
Wild Horses Couldn't Drag Him Away From Her
Raised beneath the big Montana sky, Matt Malloy was never meant to be a jet-setting businessman. But he'll do anything to protect the family ranch he shares with his brothers. Coming home after a two-week trip to Italy, Matt wants nothing more than to shed his suit and tie for a well-worn pair of jeans and ride his horse up to the cabin for some alone time. The last thing he needs is a big-city lawyer invading his privacy-even if she is the most beautiful woman he's ever seen . . .

Vanessa Kettering has devoted her life to her work. As a passionate animal rights defender, she doesn't have room for anything else. But from the moment she meets Matt, she's taken with this rugged cowboy's lazy smile and tender touch. When a raging storm traps them inside his cabin for the night, one steamy kiss leads to another, sweeping them away with a force that's as wild and untamed as the land he loves. But when the morning light comes, will she lose her heart?

Feeling oddly deflated at not being able to speak with her father, she turned toward the door. “I guess I’ll just gather up my papers and be ready to leave. I wouldn’t want to hold Burke up.”

Before Matt could follow her inside, his phone rang again. He remained outside, listening in silence.

When he finally stepped into the cabin, he crossed to the kitchen and began filling a box with food containers.

She watched him. “Won’t you need that?”

He shook his head. “Looks like I’m leaving, too. I’ll have Burke haul this down the mountain while I ride behind on my horse.”

He looked over, his face devoid of emotion. “Just some storm damage at the ranch.”

“I hope it’s nothing serious.”

He gave a negligent shrug. “Nothing new in these parts.” He set the box on the floor near the door. “I’m sure we’ll handle it.”

Hearing the sound of a truck’s engine, she started past him. As her body brushed against his, she felt a sudden, shocking sexual jolt.

She paused for a mere moment, tipping her face up to his, her eyes wide, her breath catching in her throat.

Matt reached for the door, but instead of opening it, he kept his voice low. “I’m sorry again you had to spend the night.”

“I’m not.” The words slipped out before she had time to think. Then, trying to cover her lapse, she bit her lower lip. “I’m not sorry, Matt. Whenever I look back on this, I’ll think of it as my excellent Montana adventure.”

He was staring at her mouth in a way that had her throat going dry. There was a hint of a smile on his lips. “I hope I won’t be a villain in your memory.”

Something in the way she said it had him looking from her mouth to her eyes.

Alarmed that he could read her thoughts, she blindly reached a hand to the door, only to have her hand coming in contact with his.

She pulled it away as though burned, but it was too late. The rush of heat had her cheeks going bright pink.

She looked up to see him watching her in that quiet, closed way.

Before she had a chance to think what she was doing she stood on tip-toe and brushed his mouth with a soft, butterfly kiss as light as a snowflake.

His eyes narrowed. His hands gripped her shoulders and for a moment he hesitated, as though considering. Then he lowered his head, staring into her eyes before covering her lips with his.

New York Times bestselling author R.C. Ryan has written more than ninety novels, both contemporary and historical. Quite an accomplishment for someone who, after her fifth child started school, gave herself the gift of an hour a day to follow her dream to become a writer.

In a career spanning more than twenty years, Ms. Ryan has given dozens of radio, television, and print interviews across the country and Canada, and has been quoted in such diverse publications as the Wall Street Journal and Cosmopolitan. She has also appeared on CNN News, and Good Morning America.

You can learn more about R. C. Ryan and her alter ego Ruth Ryan Langan at:
RyanLangan.com
https://twitter.com/RuthRyanLanganhttps://www.facebook.com/R-C-Ryan-and-Ruth-Ryan-Langan-120740961280094/?fref=ts

1. What would readers be surprised to find out about you?

I met my husband in first grade. And on the first day of school, he came home and announced that he was going to marry Ruthie Ryan. (And did, sixteen years later.)

2. Tell us about your writing process. Do you start with an idea or a character? I start with both. A bare-bones idea about an interesting plot, and the kind of character who would make it work.

4. What’s one book you read in the last 6 months that has left a lasting impression and why? When I’m not writing, I love reading biographies. I love seeing how and where famous world figures started out, and where they ended up. My latest bio was MORNINGS ON HORSEBACK by David McCullough. A biography of Theodore Roosevelt. He went from feeble boy with crippling asthma to a rugged Rough Rider living a strenuous life. He was so far-seeing that he set aside thousands of acres of wilderness as our National Parks, and bullied himself all the way to the White House. Just a fascinating, larger-than-life character. I highly recommend it.

5. If you could have dinner with any three authors, who would you choose and why? Hemmingway. He’d be a great story-teller and a shameless flirt. J. D. Salinger. He’s such a solitary, secretive writer. Shakespeare – because he’s Shakespeare.

6. What’s one characteristic that you like to give all your heroes? A kind heart.

7. What’s a “must” have that every heroine you write has? Basic goodness.

a. I’d never be caught dead in…a lie. And yet I’m forced to live one for a little while.

b. On a Friday night you can find me…in a high-end restaurant in Chicago, but here in Montana, at Clay’s Pig Sty.

c. One thing my family and friends would be surprised to know about me is…I’ve gone country.

a Rafflecopter giveaway
at April 26, 2016
Email ThisBlogThis!Share to TwitterShare to FacebookShare to Pinterest