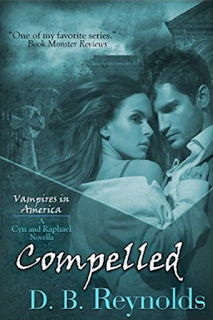 Pardon me while I release my pent up inner sixteen year old… OMG!! OMG!! OMG!!

Okay… now that I got that out of the way — OMG GUYS!! This was freaking awesome! No, really, give me a jealous, marking-my-territory, she’s-mine-not-yours Raphael any day of the week and twice on Sundays!

The fabulously snarky Nick Katsaros is in need of some help that only Cyn can supply. Too bad it comes with a hulking side of vampire. He’s on the hunt for the missing handcuffs that played a major roll in keeping Vampire Lord Rapheal captive during an ill fated takeover attempt by the European vamps. During their time together, Nick reveals some of his past to Cyn and we get a surprising look into who he really is.

I wont spoil it for you, but I will say that I am DYING for a spin off series!! I have been COMPELLED to read this three times now. YES, it’s that good! There's SO much I want to say and so many coveted plot lines I need to know about. Please oh please let Nick get his own book/series.


This is why I’m still enamored with the Vampires of America series. No end in sight and the fervor just keeps building.

OUT NOW!
Get it on AMAZON

VAMPIRE...Raphael is a power like the world has never seen, the force behind the first ever alliance of North American lords, Cyn’s mate, lover, master.

It was only a few months ago that Raphael lay helpless and dying, taken by treachery, while Cyn fought to save him. Unexpectedly, it was Nick who provided the key to his freedom. In exchange, he secured a promise that they would help him find and recover the same magical artifact that had been used to imprison Raphael. But when he calls on them to keep that promise, it will be Cyn who pays the price.

Torn between the two powerful men, struggling to keep them from killing each other, she undertakes a desperate search that will find her fighting for her life against a madman who wants her for himself.

OUR WISH HAS BEEN GRANTED!!!
COMING JUNE 15TH

at April 24, 2016
Email ThisBlogThis!Share to TwitterShare to FacebookShare to Pinterest