The Mistake (Off-Campus #2) by Elle Kennedy 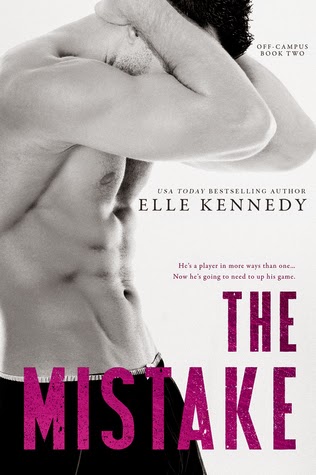 Give me humor with my romance and I will follow you into the deep end of the pool!
The Mistake is my kind of NA romance; a little angst, a little sexy and a whole lotta funny. Logan is still crushing on his best friend’s girl when, by mistake, he meets the lovely but quirky Grace. They spend a surprisingly great evening together however the “good bye” ends up being an awkward bit of a mess.

For whatever reason, Logan just can’t get over Grace or his somewhat humiliating goodbye to her. What culminates is a fun and fulfilling start to a great friendship/romance. That is, until the lovable yet clueless Logan opens his massive mouth and sticks his ice skating foot right in it.

Grace can’t believe she just opened herself up to be the most vulnerable she has ever been with someone and gets slammed in the gut with words she never thought to hear in that particular situation. Have no fear ladies! Our Grace ain’t no doormat!  Well…. not anymore. She takes her life and her self-respect and pulls herself up and into the woman she can and needs to be. If Logan truly wants her back and wants to prove himself he has to earn it and make amends.

The Mistake is a laugh out loud journey. As funny as it is, I gotta say, there are some extremely touching moments. I shed tears for Logan. He isn’t all he seems on the outside. His family life is far from perfect and you get an insight into the kind of childhood that shaped the person he is today.

Funny, moving, endearing and a positively terrific follow up book in the Off-Campus Series!

4He’s a player in more ways than one…

College junior John Logan can get any girl he wants. For this hockey star, life is a parade of parties and hook-ups, but behind his killer grins and easygoing charm, he hides growing despair about the dead-end road he’ll be forced to walk after graduation. A sexy encounter with freshman Grace Ivers is just the distraction he needs, but when a thoughtless mistake pushes her away, Logan plans to spend his final year proving to her that he’s worth a second chance.

Now he’s going to need to up his game…

After a less than stellar freshman year, Grace is back at Briar University, older, wiser, and so over the arrogant hockey player she nearly handed her V-card to. She’s not a charity case, and she’s not the quiet butterfly she was when they first hooked up. If Logan expects her to roll over and beg like all his other puck bunnies, he can think again. He wants her back? He’ll have to work for it. This time around, she’ll be the one in the driver’s seat…and she plans on driving him wild.

at April 23, 2015
Email ThisBlogThis!Share to TwitterShare to FacebookShare to Pinterest