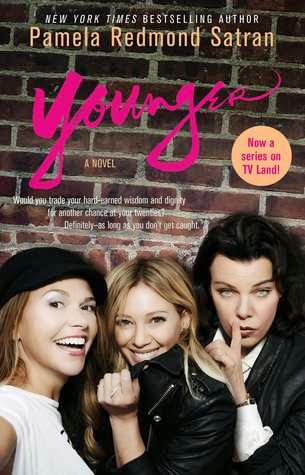 This title is a March Highlight for the XOXperts Street Team!
Click HERE to find K's street team review and find out what the other members think.
Come and Join XOXO AfterDark
to stay informed about your favorite Simon & Schuster Romance titles:
www.xoxoafterdark.com

A story of inspiration and transformation for the really desperate housewife; now a TV series from the creator of Sex and the City, starring Sutton Foster and Hilary Duff!

She's old enough to be his mother.

Alice has always looked young for her age, even with her graying hair and her dowdy New Jersey housewife style. Make that ex-housewife: Now that her husband's gone and her daughter is grown, Alice is in desperate need of a whole new life. So she lets her best friend Maggie, a hip New York City artist, transform her on New Year's Eve. Soon, thanks to the wonders of hair dye and tight jeans, Alice looks really young, as one night in a Manhattan bar confirms. At midnight, she kisses a boy who was in diapers when she was in high school.

She's having too much fun to care.

The white lie Alice tells Josh gets her thinking that if no one asks her age, she doesn't have to tell. So she applies for a job she had briefly before becoming a full-time mom; and gets it. Meanwhile, Josh is falling head over heels for Alice, who's just way cooler than girls his age. He figures she's about twenty-nine; and for the first time since she was twenty-nine, or possibly ever, Alice feels that life is ripe with possibility. Unfortunately one possibility is that she's gonna get caught.

Challenging the adage that the truth will set you free, Younger is a hilarious and insightful story that proves that you're only as young as you feel.

This is one of those books that I dove into without really knowing what to expect and also with a bit of hesitation because I am not easy to please when it comes to Romantic Comedy. But, I am a huge fan of books that tug on my emotions and this book did successfully do that. There were several scenes where I was definitely reaching for the Kleenex because it kind of hit the nail on the head for how I've been feeling now that I'm in my forties. It was also kind of eerie for me because I saw so much of myself in the main character, Alice. I'm the same age, I lost my mother last year, my kids are fleeing the nest, I also gave up a career to take care of my family. So, yes, Alice and I were kindred spirits in that regard.
I definitely connected with some of the personal challenges Alice was going through as a woman who has spent most of her life as a devoted housewife and mother. When the children leave the nest it leaves you feeling lost and wondering, "What the heck am I going to do now?" Being in your forties is a time when it's "almost" too late to start over. You're too young to give up but definitely too old for some things. But, that doesn't mean we shouldn't try… right?? And, that's where Alice decided to take a chance. She looks unusually young for her age, so she decides to use this to her advantage to take back some of the things she felt she missed, more specifically a shot at a career in the publishing business. What she didn't expect was to find love again and with a man in his twenties. That's when the façade she was playing really started to become a challenge.
I loved the friendship that Alice shared with Maggie and they were two sides of the same coin. Alice gave up her career for family and Maggie gave up family for a career. Now, Alice wants that career she gave up and Maggie is desperate to become a mom. These are both very difficult things to achieve in your forties. The one thing I kept thinking about was this… no matter what choices you make when you're in your twenties, there are always consequences to those choices and regrets that will come back to haunt you when you're older. That's what the mid-life crisis is all about… Did I make the right choices? Would I do it all different if I had a choice to go back and do it all over again? In that regard I thought the author did a wonderful job of addressing some of these difficult issues we face during our middle age years and blending it into a story that is yes, a little bit farfetched but at the same time entertaining and thought provoking.
The ending of the book did leave me hanging a little, I had a lot of unanswered questions in regards to her daughter and some of her rash decisions. And, will the love between Alice and Josh prevail over the age gap? I guess we'll have to fill in our own blanks in that regard. I can see how this would make for a great TV series, and I liked this story enough to go and check it out. Maybe I'll get some of these questions answered. :)
Did this work for me as a Romantic Comedy?? Not really. I liked it more for the thought provoking, emotional moments that it evoked. I do think this would be a fun choice for a book club... a little wine, a little chocolate, a little debate... could be fun!