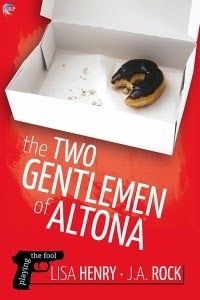 Yes, yes, yes! I have been waiting for an M/M romance like this to come along. Conman meets FBI guy. Straight-laced paunch meets wily rouged muscle.

Henry Page is a witness to murder. Who is Henry Page really? Funny, sweet, flirtatious  and excitable. He is also haunted by a past and has built a facade that hides all his vulnerability.

Mac is a tad on the paunchy side, as of late. The damn doctor has placed him on a diet and trying to quit caffeine was the worst idea ever for this top agent. He’s grumpy, on a dating slump, and just pissed at the world in general right now.

I love these two together. Henry pushes all Mac’s buttons, and Mac, well he is making Henry re-evaluate some of his life choices. When these two hit the road together in an attempt to keep Henry safe, and in witness protection, hilarity ensues.  Snarky hijinks and some unexpected punch lines had me doing the giggle snort throughout this read. My only negative is realizing this is a series and I DON’T have the next two books!

It’s gonna be an adventure finding out if these two will make it through alive.

*Given via Riptide Publishing

Special Agent Ryan “Mac” McGuinness is having a rough week. Not only is he on a new diet, but he’s also been tasked with keeping Henry Page—the world’s most irritating witness—alive. Which is tough when Mac’s a breath away from killing the Shakespeare-quoting, ethically-challenged, egg-obsessed Henry himself. Unless killing isn’t really what Mac wants to do to him.

Con man Henry Page prefers to keep his distance from the law . . . though he wouldn’t mind getting a little closer to uptight, handsome Agent McGuinness. As the sole witness to a mob hit, Henry’s a valuable asset to the FBI. But he’s got his own agenda, and it doesn’t involve testifying.

When evidence surfaces of a mole in the FBI office, Mac and Henry are forced to go into hiding. Holed up in a fishing cabin, they’re surprised to discover that their feelings run more than skin deep. But as the mob closes in, Henry has to make his escape. And Mac has to decide how far he’s willing to go to keep Henry by his side.

at December 30, 2014
Email ThisBlogThis!Share to TwitterShare to FacebookShare to Pinterest