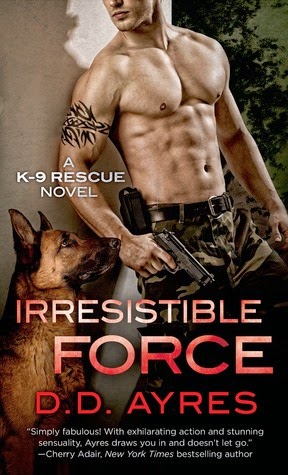 Is a dog really man’s best friend or can he be persuaded? Such a cute idea for a book. A K-9 officer has his dog stolen and finds him in the arms of a woman who saved him from being euthanized.  Only now both have an attachment to Prince/Bogart. Adorable right? I just wished it flowed better. I was at 25% and we were still on day one. Yes, there is some “insta infatuation” going on but that didn’t bother me so much.

I was confused by Shay; one minute she was this fierce independent woman, and the next…not so much. I just couldn’t connect with her. I really wanted to though. I liked her, but there was just something missing.

I do feel this to be a good summer book as it’s easy to pick up and walk away from for a bit. Yes, that’s meant as a compliment :)

When adrenaline runs high, so does the force of desire…

For Shay Appleton, it’s love at first sight when a gorgeous stray dog is brought into the animal shelter where she works. She just knows he’ll make a terrific watch dog—and with an abusive ex who won’t let go, she needs all the protection she can get. But Shay never suspected that her new pet is actually a trained police K-9 named Bogart—until Bogart’s even more gorgeous, human partner shows up on her doorstep.

Officer James Cannon is one tall, strong alpha male who’s convinced that Shay stole his dog. But once he gets closer to the suspect, he realizes that this stubborn, independent woman not only needs a guard dog, she needs James as well. It seems that someone from her past is stalking her, and threatening her life. When danger meets desire, will James risk his career and his best friend…to protect the woman who’s stolen his heart?

at June 26, 2014
Email ThisBlogThis!Share to TwitterShare to FacebookShare to Pinterest