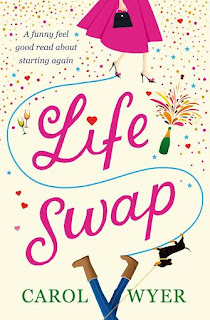 She wanted a new life and true love. Be careful what you wish for ...  Handsome prince, beautiful house, fabulous job? Polly has none of these. All she has to her name is a string of failed relationships and she’s up to her ears in debt. She sees herself as a hopeless case and would do anything to change her luck.
Simon is approaching the big 50. He’s off his game at work, his kids don’t seem to notice he exists and his wife seems to think he’s made of money. As for sex …what’s that?
So when the opportunity comes for both of them to swap their lives for a life of luxury, they jump at the chance. For Simon a life of helicopters, fast cars and hot babes beckons. For Polly, it’s all diamonds, spa days and celebrity parties. Now all that's missing from her life is a bit of romance. Can handsome stranger Matt step up?
Trouble is, the grass isn’t always greener on the other side. Can the life you've always dreamed of get in the way of true love?
A witty, heart warming read, perfect for fans of Debbie Johnson and Carole Matthews.

Carol E. Wyer is a writer, blogger and stand up comedian best known for her work in humour. Grumpy Old Menopause won the People’s Book Prize Award for non-fiction in 2015. Her best-selling books deal with themes of ageing and encourage people to carpe diem.

Born in Munster, Germany, to a military family, she was raised in various locations in the UK, Carol earned a degree in English and French and a Certificate of Education from the University of Keele. After completing her studies she moved to Casablanca to teach English and French and translate for companies. In 1986 she returned to the UK to teach at a private boarding school in Staffordshire before setting up her own language company Language 2000 in 1988. At the same time she wrote a collection of educational books used in schools to teach French to young children. She married the man she refers only to as “Mr Grumpy” in 1988. In 1997 thanks to recurring problems with her spine, she retrained to become a personal trainer and fitness instructor.

In 2010 she turned to writing for the adult market. Her first novel Mini Skirts and Laughter Lines was self-published but became a best-seller earning her a feature in Woman’s Own magazine and further media coverage. The rights to Mini Skirts and Laughter Lines along with her second novel Surfing in Stilettos were then taken up by ThornBerry Publishing. Carol was offered a three-book deal with Safkhet Publishing late in 2011 who went on to represent all her works. In 2015 it was announced Carol had signed a two-book deal with publishing house Bookouture for two humorous novels to be released in 2016.